Did Hillary Just Ring the Bell?

There’s an old Wall Street adage which says “they don’t ring a bell at the top”. While I generally agree with the sentiment of that adage, I would modify it to read “technically speaking they ring a series of bells at the top”. However, that version is quite cumbersome, not nearly as pithy. But when I first saw this video of Hillary fainting/collapsing, I thought – gosh, are they actually ringing a bell this time? Is that a bell for the top in the 15 month ongoing DISTRIBUTION process/topping formation of Janet Yellen’s favorite economic indicator – the S&P 500? Is her collapse a telltale sign of the collapse of globalism? I believe it’s emblematic and a perfect metaphor for my view of the current economic/global govt. bond market situation. That situation is the massive DISTRIBUTION process of the decades long push by the elitists to force globalism/open borders on the rest of us. And that DISTRIBUTION is coinciding with the concomitant massive topping formation in the confidence levels regarding the ability of central bankers (CBs) to bail the world out of any downturns. And that confidence level is the one thing that is holding this all together. I receive so much correspondence from good, hard working folks who are so frustrated by the seemingly endless “ability” of CBs to keep the party going. But last call is approaching. And I understand the frustration from folks.

I have written several times about my outlook for the timing of the secular bear market in bonds to firmly take hold. The most recent general outline is here. I have zero confidence that the CBs can endlessly deceive the vast majority of participants. And it’s in the CBs upcoming powerlessness to stop (for more than a temporary basis) the surge in yields, that will really accelerate the loss in confidence. So, my view is the massive DISTRIBUTION in globalism and also the massive DISTRIBUTION in the confidence levels in CBs can both be viewed by understanding the internal technical structure of the US long term bond. The thirty year yield chart attached shows the massive topping formation (inverse) in the US long bond. The beginning of the end of the huge bull market in bonds way back in 2008 is shown as point #1. That technically was the preliminary supply area (inverse). And ever since then there has been a series of buying climaxes (inverse) and retests. The secular turns (ACCUMULATION and DISTRIBUTION) in govt. bond markets take a long, long time. There’s a general rule which states the longer that those tops and bottoms take to unfold, then the bigger and longer the ensuing UPTRENDS and DOWNTRENDS last. That “rule” is why I am so wildly bullish (on a LONG TERM basis), on gold. The other attached chart shows gold’s humongous ACCUMULATION area from the Jan. 21, 1980 bubble high to the July 20, 1999 low. (Please ignore the writing on the far right of the chart.) Silver’s ACCUMULATION area is even bigger.
So in general, I’ve expected the shortest term rates in the US to bottom first. That occurred in 2011. Then I’ve expected the longest term rates to lag by many years – likely six years. So the full bear market in bonds is fast approaching. And full disclosure: I’ve stated several times that I have a huge position in US govt. bonds. I bought those bonds around 16 years ago when rates were multiples of where they are now. You’d have to be INSANE to buy bonds now for more than just a trade. I have not yet sold any of those bonds, but I have hedged them short term at times. I realize that one of these highs (in price) is now going to be THE all time high in bonds for the next several decades. But it’s tough to give up those “high yielding” (not “high yield”, at least not yet) instruments. But I am considering finally starting to sell into the big rallies (in price). I will update as needed.

The point of this post is: Did Hillary actually “ring the bell”? 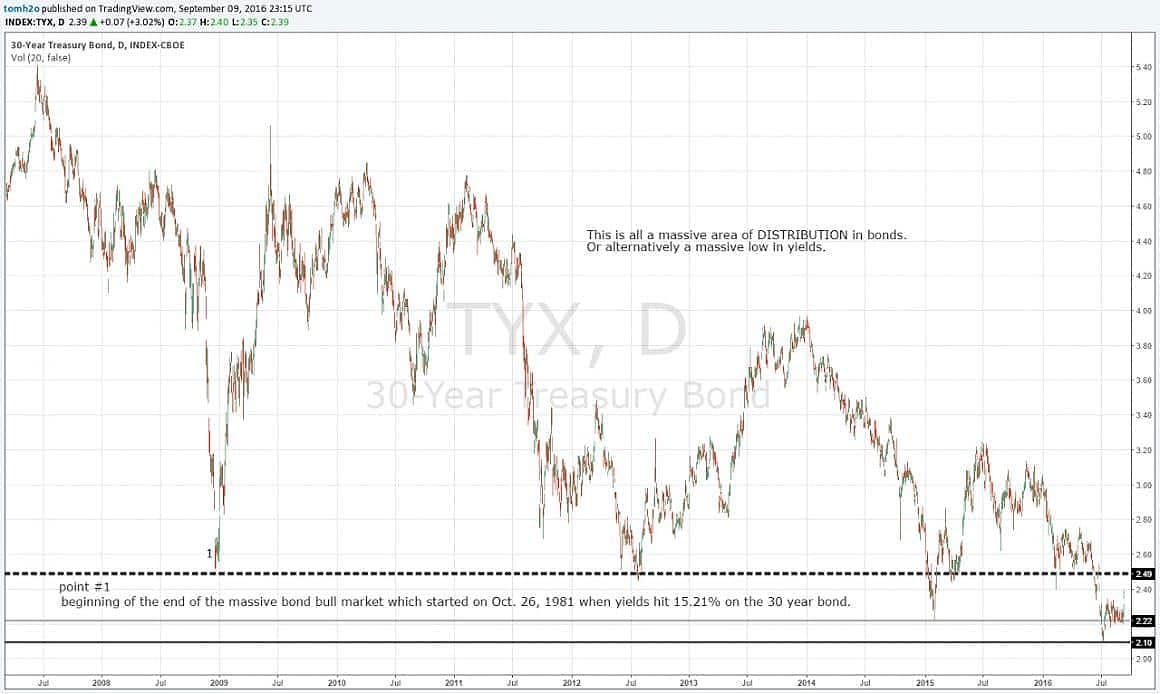