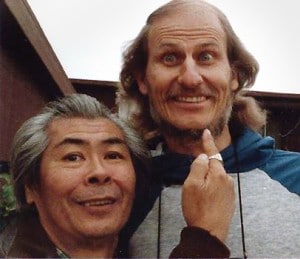 Adano Christopher Ley (like a true Sagittarius Fire Sign) was born in a burning house owned by his mostly Asian parents in South America.

His father was Mongolian and his mother was one-half Southern Chinese, one-quarter Spanish, and one-quarter Carib Indian.

Adano went to school for one day, deciding, “They can’t teach me what I want to learn,” and went to work as a tailor.

He traveled to New York, where he mostly worked for RCA (plus odd jobs like working for Jack Dempsey the boxer.

Transferring to Canada, he continued his job with RCA until he fell off a roof, recuperating in a hospital for one year and nine months.

Adano discovered and experimented with Solar Nutrition during his extended confinement in a full-body cast, thanks to the cooperation of the hospital administrator.

The American C.I.A. was involved, but no one seems to know how much or in what way.

Crossing the border into Mexico during a snowstorm, the border guard proclaimed, “Quetzalcoatl has returned!”

Adano was officially made a Swami a few years before I met him and became his friend and student for fourteen years.

Adano’s official Swami name was Nityananda Saraswati, but he preferred to be called Swami Nitty-Gritty, because he “got down to the real nitty-gritty.”

Miracles followed him as a matter of course, but he preferred to call them “the cosmetics of the actual experience.”

He was the Kit Carson of the Aquarian Age.

Ask any of his students or friends exactly who or what Adano was, and you’ll get as many different answers as he had students and friends.

When asked who or what he was, he once replied, “I am nothing but a figment in the imagination of Paramahansa Yogananda.”

Pursued for details, he answered, “I am the wallpaper.”

When he finally went on his Cosmic Vacation, his body smelled strongly of roses, just as he had predicted.

His brown eyes also turned to blue, just as he had also predicted.

Adano also said that he was “turning into a blond-haired, blue-eyed Oriental,” and there were reports of such space aliens shortly after he left.

His typical Asian brown eyes really did turn blue in the body he left us with, something I know for sure because I was his iridologist.
.
.

The Pandemic That Never Was

One Vaccination Under Gates

A Stony Mass of Feces