A new report from Sierra Club and Earth Justice finds that Americans are not adequately protected from this pollution. Amazingly, there are no national regulations. This year, the EPA will be finalizing new, nationwide standards for coal ash. The recent “clean power plan” by the EPA placed on industrial carbon pollution is critically needed to protect America’s communities and public health from the worst impacts of coal ash.

-What happened in North Carolina with the recent coal ash spill which was the 3rd largest spill in the nation’s history?

-Why coal-fired power plants are one of America’s biggest water polluters.

-The mercury air toxin standards, which were implemented in 2012, has been a huge accomplishment

-Who do we address at the EPA?

-What else can we do to reduce air pollution?

-How has solar and wind technology become more affordable?

-How do fish become so toxic with mercury which fish store the most? 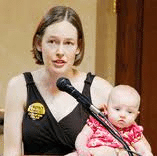 Mary Anne Hitt is director of the Sierra Club’s Beyond Coal Campaign, which is working to eliminate coal’s contribution to global warming and repower the nation with clean energy.

Learn more about Beyond Coal