Author of The Sugarmaker’s Companion

Mike puts tapping within reach of everyone near a maple, birch or walnut tree!

When we top our waffles and pancakes with syrup, most of us unwittingly reinforce two myths: first, that such golden sweetness comes only from maple trees; and second, that only the syrup, itself derived by boiling volumes of sap, is tasty and safe. But in The Sugarmaker’s Companion, Michael Farrell–seasoned sugarmaker and director of Cornell University’s Uihlein Forest, a maple syrup research and extension field station near Lake Placid–challenges both assumptions.

Maples provide the dominant syrup, beyond a doubt. But we today tap only 1% of the tappable trees in the U.S. And in addition to maples, Farrell contends, there are hundreds of millions of tappable birch and walnut trees around the country. Tapping these trees does them no harm, he assures us, and the sap is chockfull of nutrients missing from its ubiquitous synthetic replacement, high fructose corn syrup.

Today, at least ten companies in the U.S. and Canada are bottling maple sap as a drink. Birch and walnut sap can also be enjoyed “straight,” as people in Korea have been doing for generations. In fact, most of the birch sap collected in the world is used for drinking rather than for boiling down into syrup. For although producing syrup is a fairly involved process, anyone with access to a few tappable trees can drink fresh sap.

But let’s not forget maple syrup completely. As Americans are consciously deciding to consume local, natural, healthy, organic and sustainably produced food, maple syrup has become the fastest growing agricultural industry in the country. As a recent New York Times article suggests, do-it-yourself maple syrup is attracting adherents in such unlikely places as Brooklyn, New York. For most of the country, sap can be a local and sustainable source of nutrition and sweetness. 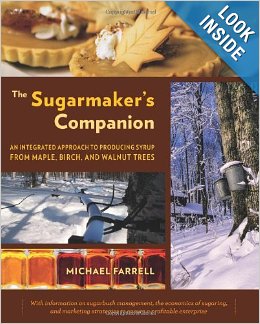 'Mike Farrell – An Integrated Approach to Producing Syrup from Maple, Birch and Walnut Trees – February 18, 2014' has no comments