HOW TO STOP CHEMTRAILS? 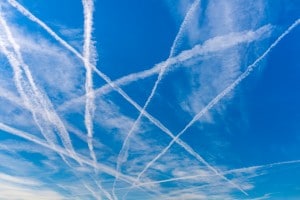 Here’s how to turn your city into a No-Fly Zone for chemtrail planes:

1) HOW TO STOP CHEMTRAILS? From a private pilot, pilot’s airport gift shop or other agency, buy or borrow an aeronautical chart for your region. Check out the charted air routes, drawn in purple or magenta, for your area. Look for Military Exercise Areas, and any air navigation beacons in your vicinity, which could account for unusual or sporadic concentrations of aircraft. If none are shown to be a factor, proceed to Step 2.

2) HOW TO STOP CHEMTRAILS? Optional: Download and activate “Flight Explorer” trial software. Learn how to identify aircraft flying over your region.

3) HOW TO STOP CHEMTRAILS? Videotape multiple aircraft laying chemtrail patterns over your city, town or neighborhood. Three, four or more planes flying in close proximity to each other while spreading broad white plumes is best. Summer days work well because normal contrails cannot form if the air is too hot and too dry. If you can get similar-size jets leaving brief or no contrails in the same shot with planes leaving long white plumes, your video will be even more convincing.) Use a digital camcorder and tripod, if you can, for telephoto shots. Turn the time/date function in the display “ON”. Local networks will want to use your footage.

4) HOW TO STOP CHEMTRAILS? Call the nearest airport weather office, or go online and find out the temperature and humidity for 35,000 feet at the time and place you shot your video. Tankers leaving a radar-reflecting haze have been tracked at altitudes from 18,800 to 37,000 feet. Higher altitudes are ore common – and colder. So if you document temperatures much warmer than minus 40F and relative humidity much less than 70% at 35,000 – atmospheric science says what you are seeing cannot be the frozen water vapor of normal airliner condensation trails. Put this information away for later use.

5) HOW TO STOP CHEMTRAILS? Optional: Use “Flight Explorer” to find all commercial and military flight plans for the place and time your video was taken. When Mark Steadham did this for Houston in the winter of 2000, he discovered that identified airliners and military aircraft at the time of his observations were simultaneously leaving plumes lasting 22 seconds and four to eight hours respectively. Combining stratospheric temp/humidity date with “Flight Explorer” can make a convincing case for chemtrails. If you don’t want to futz with “Flight Explorer”, go directly to Step 4.

6) HOW TO STOP CHEMTRAILS? Call the closest airport tower or air traffic control center and ask to speak with the person in charge. Write down their name. Ask what all those big planes are doing flying over your town. Assume an ignorant but concerned citizen’s stance.

DO NOT USE THE WORD, “CHEMTRAILS”.

Do not make any accusations or allegations. If the reply is, “We don’t know,” respond as two Canadian brothers recently did, and remind the air traffic official you’re speaking with that it’s their job to know. If you are told that these planes are normal airliners – ask for the specific airlines involved. Then explain the reason for your concern:

7) HOW TO STOP CHEMTRAILS? The big jets are flying too close together! Aren’t commercial jetliners supposed to fly miles apart – especially over populated areas? But these planes are flying formations in grids, rows or X’s? Isn’t this illegal?

8 ) HOW TO STOP CHEMTRAILS? Repeating your concern for public safety, demand an immediate cessation of this dangerous aerial activity.

9) HOW TO STOP CHEMTRAILS? If you are unsatisfied with the response and chemtrails continue, find local allies interested in pressing a Class Action lawsuit for public endangerment. Do not use the word “chemtrails” in your new organization’s name. Instead of referring to “blue skies” or air quality issues, the moniker you choose should focus on air safety, and the health, serenity and safety of those on the ground.

10) HOW TO STOP CHEMTRAILS? Check with environmental organizations and other citizen action groups to find a good lawyer willing to take your case. When it comes to aircraft proximity in flight, safety regulations are extremely strict. Your time-and-date-stamped videotape – and eyewitnesses at the time it was made – can be used to prove serious breaches of air regulations regarding commercial aircraft separation. And your group wins. If officials are forced to admit these were military planes, allowed to fly repeatedly over your neighborhood in crisscrossing formations, you win with an even bigger news story!

11) HOW TO STOP CHEMTRAILS? Take out a classified ad. Using a bold headline, invite other
concerned citizens to join your class action lawsuit.

12) HOW TO STOP CHEMTRAILS? Contact all the media you can reach, local and national. Prepare a one-page press release. The first paragraph should announce your pending lawsuit. Briefly cite the incident(s) of heavy aircraft flying too close together, which precipitated you or your group’s concern for public safety, which led to the lawsuit. Make sure to contact your cable TV station, as well as print and radio news.

13) HOW TO STOP CHEMTRAILS? As the issue heats up, with public air safety officials being called to account, take your campaign to the next level. What about all the pollution coming from those jets? Isn’t that illegal, too?

14) HOW TO STOP CHEMTRAILS? When told by authorities that these plumes are “harmless” contrails, remind them that the supposedly “safe” artificial clouds caused by normal condensation trails can be seen as dangerous air pollution that robs the blue skies essential to good health and life, while altering weather and climate by drastically changing a region’s atmospheric heat balance. Then point to your temperature/humidity records to prove that the plumes you’re citing cannot be contrails because the upper air is too warm and too dry for any such artificial clouds to form – unless massive amounts of particulates are added to the air for moisture to coalesce around. The smaller the particles, the more clouds are formed. And the greater the human health hazard that results. Repeat Steps 6 through 10. Network with other cities and groups. Contact the media about the twin menace of contrails and chemtrails. Spread the word.

'HOW TO STOP CHEMTRAILS?' has no comments

Why Cell Phones & Tablets are Absolutely NOT Safe for Children