This election season has been something unlike anything we’ve seen in most of our lives. We, here at One Radio Network, have tried over the years not to involve ourselves in politics, but somehow this election has hit a nerve. Is it the threat of Globalism that Andrew Gause talks about? Is it the corruption we’ve witnessed? Or is it the big lies which have gently twisted the minds of many Americans? The first question is: Why are Republicans viewed as the racists and the haters of women?In the final vote of the 13th Amendment, all 86 Republicans had voted in favor of it, along with 15 Democrats, 14 Unconditional Unionists, and 4 Union men; opposition came from 50 Democrats and 6 Union men.The Thirteenth Amendment (Amendment XIII) to the United States Constitution abolished slavery and involuntary servitude, except as punishment for a crime. That doesn’t sound very racist to us.

As far as women’s right, it was then, yet again, the Republicans who lead the passage of the 19th Amendment with the majority vote. In fact, the GOP has been supporting women’s voting rights since 1954. 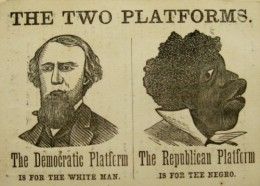 So how did these lies happen? How did the truth become so skewed?

Our guest, Alan McIntyre, is a black American conservative who has dug into the history of how all this evolved. How the black communities have been manipulated into believing lies. Please watch Alan’s video which is posted below and pass it around to everyone you know. If you are going to vote, you need to know WHAT it is you’re actually voting for which means voting for someone who will unite America and create an environment in which all Americans can thrive.

-The Exodus Project mission is to lead black people away from the Democrat party. Let my people go.

-Andrew Jackson owned over 200 slaves and beat and raped them. He founded the Democrat party.

-Politics of the Democrat party are detrimental to blacks. Homicidal, genocidal maniacs.

-Entitlement programs are a transfer of property, which is theft of money and labor, which is slavery.

-Only way to receive benefits should be from charity, which is a voluntary contribution.

-Alan advocates for a flat tax system with all paying 10%.

-Trump’s “Build A Wall” is pro-black. Blacks must compete with illegals. If Democrats give illegals amnesty, the illegals’ loyalty will be to Democrats.

-What the Democrats have prescribed isn’t working. Jobs are what is needed. If jobs are created, it takes away a campaign promise.

-Does NPR separate people even more?

-Alan views establishment Republicans the same as liberal Democrats. No desire for truth.

-Liberal Democrats are racists because they treat blacks as children that can’t do for themselves.

-Establishment Republicans are not willing to take on the difficult task of undoing the lies and deceit put out by the Democratic party. Will continue to allow blacks to be exploited by the “urban core plantation” because it costs too much to effect change.

-Alan fights to restore his political home to the party of Frederick Douglas rather than abandoning it.

-We need to be accountable to each other and look out for each other.

alan mcintyre and how the left has abandoned the black community, november 3, 2016
https://soundcloud.com/oneradionetwork/110316_mcintyre_alan

'Alan McIntyre – The Exodus Project: Let My People Go – Leading the Black Community Off the Democratic Party’s Plantation for Good – November 3, 2016' has no comments