Author of American Freedom: A Conversation with America for “Change” in the United States

WHY NOT BE FREE?

Charles Erwins interest in the Constitution started with being prosecuted in his early 20’s by the IRS for conspiracy to defraud the government. He tells us this story and his journey in discovering just exactly how this system works. The fruit of this process is his book American Freedom.

Learn the shocking truth explaining how multiple forms of laws are being used in America by representatives of the secret UNITED STATES government to economically enslave the American people …WITHOUT OUR KNOWLEDGE OR CONSENT.

•The Income Tax is legal, but it only applies to certain “Individuals” and “Persons” in the secret UNITED STATES instead of every American Citizen as you were led to believe

•How to determine unconstitutional from constitutional where laws are concerned without an attorney by using information, definition, and evidence to break down the laws which should and should not apply to an American Citizen

It makes no difference if Government is “Big” or “Small”, or run by “Democrats” or “Republicans” when it is in De facto, and the American people no longer control their nation. 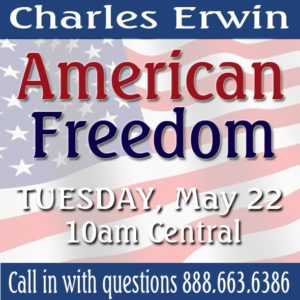 'Charles Erwin – Author of American Freedom – Lawful Battles Cannot Be Won in a Legal System – May 22, 2012' has no comments