F. William Engdahl has written on issues of energy, politics and economics for more than 30 years, beginning with the first oil shock in the early 1970’s. He has written Seeds of Destruction: The Hidden Agenda of Genetic Manipulation, A Century of War: Anglo-American Oil Politics and the New World Order, Gods of Money: Wall Street and the Death of the American Century and Full Spectrum Dominance: Totalitarian Democracy in the New World Order.

Mr. Engdahl has become a monthly contributor to our show and we feel he is one of the best voices in the world of geo-politics.Todays topics:

-The European Debt Crisis: A crisis which will go on for years

-The Eurobond and Germany: Why the resistance?

-It suits the Pentagon to have a North Korea

-The politics of oil 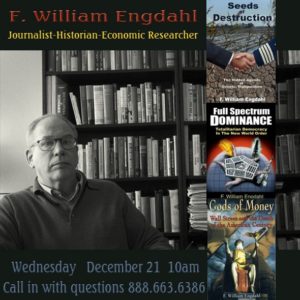 Mr. Engdahl’s books are available on Amazon as hard copies, e-books and Kindle