“The Rockerfeller Family are the big players here…..”

Author of Seeds of Destruction:The Hidden Agenda of Genetic Manipulation

This skillfully researched book focuses on how a small socio-political American elite seeks to establish its control over the very basis of human survival, the provision of our daily bread. Control the food and you control the people. This is no ordinary book about the perils of GMO. Engdahl takes the reader inside the corridors of power, into the backrooms of the science labs, behind closed doors in the corporate boardrooms. The author reveals a World of profit-driven political intrigue, government corruption and coercion, where genetic manipulation and the patenting of life forms are used to gain worldwide control over food production. The book is an eye-opener, a must-read for all those committed to the causes of social justice and World peace. 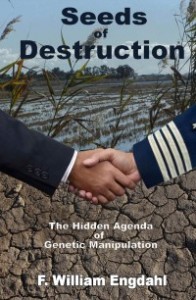 Born in Minneapolis Engdahl is the son of F. William Engdahl, Sr., and Ruth Aalund (b. Rishoff). Engdahl grew up in Texas, and after a degree in engineering and jurisprudence from Princeton University in 1966 (BA) [1] ,and graduate study in comparative economics at the University of Stockholm from 1969 to 1970, he worked as an economist and free-lance journalist in New York and in Europe. Engdahl began writing about oil politics with the first oil shock in the early 1970s.

'F. William Engdahl – Seeds of Destruction :The Hidden Agenda of Genetic Manipulation – October 6, 2010' has no comments