Autism and Vaccines
Dr Andrew Wakefield, MB, BS, FRCS, FRCPath, is an academic gastroenterologist. He received his medical degree from St. Mary’s Hospital Medical School (part of the University of London) in 1981, one of the fourth generation of his family to have studied medicine at that teaching hospital.
He pursued a career in gastrointestinal surgery with a particular interest in inflammatory bowel disease. He qualified as Fellow of the Royal College of Surgeons in 1985 and in 1996 was awarded a Wellcome Trust Traveling Fellowship to study small-intestinal transplantation in Toronto, Canada. He was made a Fellow of the Royal College of Pathologists in 2001. He has published over 140 original scientific articles, book chapters, and invited scientific commentaries.
In the pursuit of possible links between childhood vaccines, intestinal inflammation, and neurologic injury in children, Dr. Wakefield lost his job in the Department of Medicine at London’s Royal Free Hospital, his country, his career, and his medical license.

-The gut/brain connection: Children with autism appear to have gut issues

-The younger the child, the easier it is to reverse it

-Making the connection between the vaccines and gut issues: Dr. Wakefield tells us the story behind the controversy of the MMR vaccine 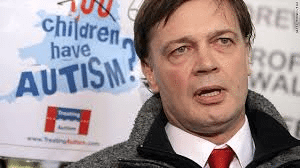 'Dr. Andrew Wakefield – The MMR Vaccine/Autism Link in Children – December 9, 2014' has no comments