The Cholesterol Campaign and Its Misleading Dietary Advice

A major, worldwide health problem today is obesity and type 2 diabetes. Since long the general view has been that the cause is lack of exercise and intake of too much saturated fat (SF). However, the epidemics of obesity and diabetes began in the early eighties, shortly after the introduction of the “Dietary guidelines for Americans” according to which a reduction of SF and an increase of carbohydrates in the diet was seen as the road to eternal health. Since then SF intake has declined and carbohydrate intake has increased in most countries.

Recently several health authorities have realized that the vilification of SF was a mistake and many trials have shown that doing the opposite may solve the problem. Instead we are now advised to exchange SF with polyunsaturated fat (PUFA) without specification. If followed, this advice will result in a further increased intake of Ω-6 rich plant oils and margarines, because these are the dominating PUFA-containing foodstuffs on the market.

-Side effects from statin drugs

-The problem with a high carb diet

-Diabetes and the reason the rate continues to climb

-What causes arteries to clog?

-Staying away from soy 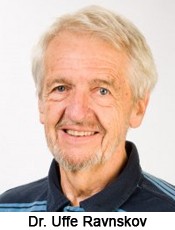 Uffe Ravnskov was born 1934 in Copenhagen, Denmark. He graduated in 1961 from the University of Copenhagen with an M.D, but has worked most of his time as a clinician and a researcher in Sweden, where he got his PhD from the University of Lund. He has published more than 100 papers and letters critical of the cholesterol campaign; most of them in major medical journals. Honoured by the Skrabanek Award 1999 given by Trinity College of Dublin, Ireland for original contributions in the field of medical skepticism, and by the 2007 Leo-Huss-Walin Prize for Independent Thinking in Natural Sciences And Medicine. He is a member of the editorial board of two medical journals and is the creator and spokesman of THINCS, The International Network of Cholesterol Skeptics (www.thincs.org), an organization that includes more than 100 researchers and other university graduates from all over the world. More details about Uffe Ravnskov are available on www.ravnskov.nu/uffe

'Dr. Uffe Ravnskov – The Cholesterol Campaign and Its Misleading Dietary Advice – March 25, 2013' has no comments