Sandy Rideout is a Functional Medicine Consultant whose focus and passion is on gastrointestinal tract disease and disorders and how they have a systemic effect on all other systems in the body. Evidence of gastrointestinal dysfunction has been linked to disease including autoimmune, diabetes, osteoporosis, chronic fatigue syndrome, fibromyalgia, and cancer.

Through the lens of functional medicine, Sandy focuses on all systems in the body and how they function together as one whole system which makes us human. He focuses on the patient who has the disease and NOT the disease that the patient has. He investigates the root cause of disease rather than focusing on symptoms.

Sandy works closely with a well-respected Gastroenterologist to assist with diagnosis and treatment of patients with complex gastrointestinal issues. He also teaches the basics of functional medicine to other health professionals. His primary focus is on small intestinal bacterial overgrowth (SIBO) and has mapped out the pathways of the effects of SIBO on the body. He uses this SIBO map as a teaching tool as well as a guide for health professionals to use in their practice in diagnosing and treating their patients with various diseases. 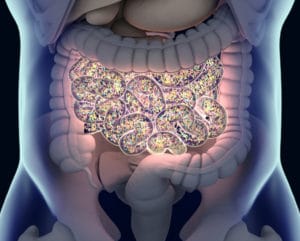 -Potentially 1,000 species of living bacteria hang out in  our gut and the idea is they get along and play nice and this is what forms the thin lining of the gut.

-When the cells are not producing enough stomach acid, which has many causes.. most of which is our reaction to stress, pressure is built up and the Lower Esophageal Sphincter remains open and allows acid to ascend.  In many cases, this is the cause of classic Acid Reflux and Heartburn.

-It is entirely possible the Pineal Gland   indeed gets dysfunctional by fluoride and other toxins and this gland is believed to control the entire endocrine system that plays a major role in proper acid production.

-Wayne Blakely of Living Streams Probiotics has a protocol for clearing the Pineal Gland.  Check out his site and products in our store

-You can talk to someone at Living Streams for more information on how to use these special probiotics  360.912.2981

-Question from a listener: My bowel movements have become smaller, more like what you see come from a cat or small animal , the size of you ring finger and also more frequently with the urge to go several times at night.

-Question from a listener: I’m drinking a combination of baking soda, salt and apple cider vinegar in water for hydration. How can we know if we are ingesting too much baking soda?

-What is the best naturopathic treatment for an overactive bowel?

-Question from a listener: My question is do you believe as a priority that emotions are more paramount say over a toxin, such a mercury? Or an infection such as lyme? I have worked with a recall healing practitioner and other energy meridian therapies as well a rectal and iv ozone.

Digestion, Digestion and more Digestion with Sandy Rideout – great information from a well researched man, May 21, 2018

'Sandy Rideout – Authority on Gastrointestinal Tract Issues – May 21, 2018' has no comments