Porphyria: The Ultimate Cause of Chronic & Environmental Illnesses

Steve Rochlitz has taught physics at several universities, and kinesiology at a third. For over three decades now, he taught his breakthrough seminars on nutrition and applied kinesiology across four continents, and is the author of 8 trailblazing health books. He has taught and helped many thousands of people. Hundreds of thousands of people have read his works in several languages. His body of work is listed at his website www.wellatlast.com where his breakthrough book on Porphyria and his newest book on Oscar Pistorius—The Possible Porphyria Factor can be purchased.

-The side effects of beta-blockers

-One in 3 people have a hole in their heart

-Exposure to dioxins have been well proven to cause Porphyria 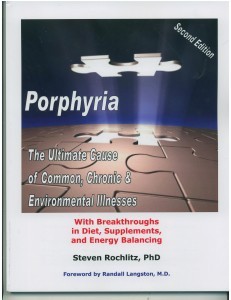