Dr. Burzynski is followed by other members of his staff; patients; and Eric Merola, the director and producer of The Burzynski Film

Are Antineoplastons the Cure for Cancer? 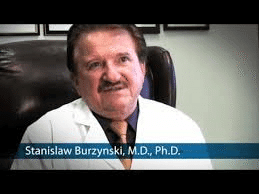 To summarize Dr. Burzynski’s story: He developed a cancer treatment that surpassed all other treatments on the market, and the FDA and the pharmaceutical industry knew it. They also knew he was the sole owner of the patents for this therapy, and these two facts combined, threatened the entire paradigm of the cancer industry.

So they decided to steal his invention. The problem is, they cannot actually use the stolen patents as long as Dr. Burzynski walks free and has the ability to defend his rights to them.

So, for the past 15 years, they’ve thrown everything but the kitchen sink at him in an effort to tuck him away in jail for the remainder of his life, or at the very least, make sure he doesn’t have a license with which to practice any kind of medicine. Without a profitable career, making and raising the needed cash for patent defense would be tricky. Sadly, you and I have all been paying for the brutal opposition to his cancer treatment this whole time. The US government spent $60 million on legal fees for just one of his trials alone…

Still, Dr. Burzynski has prevailed against enormous forces so many times it’s enough to make one believe in a higher power. Certainly, many of his patients would call him a God-send. Now, with the TMB finally dismissing their case against him, let’s hope that’s the end of the absurd witch hunt against Dr. Burzynski. (This summary of Dr. Burzynskis work is from Dr. Mercolas Website, please click here to read more)

-The smear campaign against Dr. Burzynski: There’s a 20 billion + market just for brain tumors alone; a cure for cancer would surely dig into the pockets of those profiting now. Dr. Burzynski is” determined to win in this country”. He passionately tells usof the media attacks, websites and others who are working fervently to discredit his work.

-Understanding antineoplastons; a cure for cancer?

-The battle with the FDA

-Cancer cells are our own cells; why do people with strong immune systems still get cancer?

-What is the body doing when it creates a tumor?

-Totalitarian medicine: There is no freedom in medical science today; why are doctors no longer allowed to practice the medical arts?

-Eric Merola, the creator of ‘Burzynski’, the film, joins the conversation. Eric shares his insights into why the work of Dr. Burzynski is being attacked and antineoplastons withheld from those badly in need of this cancer therapy, which does no harm to the body and has passed the phase 2 clinical trials

-Lt. Ric Schiff calls in about 1.5 hours into the interview. He is the gentleman seen in the opening minutes of the film addressing congress about the success of Dr. Burzynskis cancer therapy. Lt. Schiff lost one of his twin daughters; not to cancer, but to her brain being ravaged by chemotherapy and radiation; she had been cured of cancer by Dr. Burzynski. Lt. Schiff has since created the ANP Coalition. It is their fundamental belief that the discovery of Antineoplastons (ANP) can and will herald a new age of medical science and subsequent advancements in the treatment of previously incurable diseases. This benign yet effective drug contradicts the paradigm that cancer treatments have to be harmful to be effective, and redirects modern medicine back to its salient principal Primum non nocere, “first, do no harm”.

-Mary Jo Siegel, a former cancerpatientwas cured of non-Hodgkin lymphoma in 1993 by Dr. Burzynski, calls in to share her story.She had an ‘incurable’ diagnosis before she began treatment;from one day to the next, a tumor in her neck disappeared. She was on antineoplastons for 11 months. She now leads the Burzynski Patient Group which raises public awareness of Dr. Stanislaw Burzynski’s breakthrough treatment for cancer using antineoplastons and gene-targeted therapy. They also provide useful information and emotional support to cancer patients and their families. The website is a place where Dr Burzynski’s patients can share their personal stories with one another and the world.

–You may want to grab a tissue before the next story as we end the show with a heartbreaking, yet hope filled story of a mother who lost her 4 year old son to brain cancer. This is a shocking testament as to the rights and freedoms which have been taken from American parents and the tragedy of withholding a treatment which could havesaved a life. The mother, Donna Navarro, made a film,’Cut, Poison, Burn’about her journey through the treacherous medical system (Learn more here)Donna Navarro son was diagnosed with brain cancer

-Letting our congressmen know what we think; strength is in numbers, but do your research first; who’s funding their campaigns?

'Are Antineoplastons the Cure for Cancer? : The Work of Dr. Stanislaw Burzynski and the Smear Campaign to Discredit Him – January 28, 2014' have 4 comments