Recently, MariaRodale, the CEO of the publishing companyRodale, Inc., wrote anopen letter to President Obama regarding Syria, urging him to reconsider his position to press for a military strike against Syria.

While there is nothing unusual about Maria’s anti-war sentiment, with a recentWashington/ABC pollfinding nearly six in 10 Americans oppose military action as a response to the Syrian government’salleged useof chemical weapons, her reference to biotech companies like Monsanto poisoning our children and environment with the president’s support and encouragement, and her claim that the viral Facebook meme below contributed to her realization, caused the mainstream media to fume with reactionary waves of criticism and character assault.

All of this, of course, distracts from the underlying context of the coming war in Syria, which is a war (like most wars in modern history) spurred by the geopolitical machinations of ‘resource procurement,’ and which like most wars, are many years in the making. All else, as FrankZappapointed out, has strictly entertainment value. 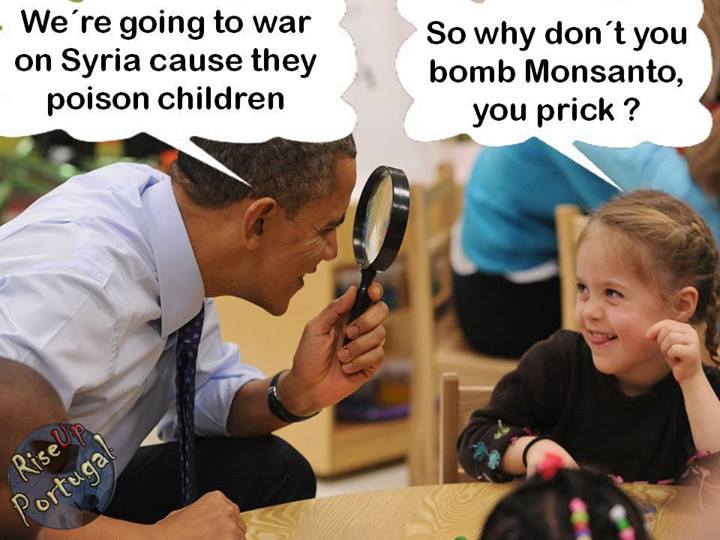 Politics is entertainment, but with deadly objectives and consequences.

If you can survive watching 30 minutes of CNN today with your senses fully intact, you will notice thatmainstream media has become fully synthetic, a plastic-like patina shimmering on everything and everyone it touches. Since the endless and unwinnable ‘war on terror’ was officially launched in 2001, news itself has gone through extensive recombinant processing. Indeed, it would seem that the only way to successfully and seamlessly wed the Media, Hollywood and the Pentagon together, and ensure their monstrous ‘love child’ remains viable, is through genetic modification. This is why one must mentally perform constant forensics and/or reverse engineering work while exposing oneself to the mainstream media, in order to protect yourself from the sticky web of hidden agendas and constructed realities. The truth, of course, is almost always labeled as “conspiracy theory” because it contradicts the orthodox narrative, which is so obviously fabricated that taking the news at face value is no different from intentionally drinking fluoridated water, with almost identical effects.

Even to petition Obama as Maria did, no matter how endearing and important an act as it is, reinforces the illusion that he is an agent with volition within the vast and powerful military industrial establishment, whose life’s blood is fiat currencies and petrodollars – hence its incessant fixation on war in countries that happen to erect their civilization on oil and otherwise valuable natural resources we want will take by force. Obama isn’t in control here. No one in history more clearly deserves an Emmy award (and not a Nobel Peace Prize) than he.

If it doesn’t make sense to you how we can say this, please watch the video below, as it will reveal information that no mainstream media outlet will reveal, lest they be forced to undergo politically-induced apoptosis, i.e. ‘programmed cell death’:


Some of our readers may ask,isn’t GreenMedInfo.com moving into the [forbidden] realm of politics by writing on these topics?Therein stands the illusion: that one can in fact beapolitical. When your country goes to war in your name, it is not possible to remain morally uninvolved, as silence and inaction is collusion. Watch theWikileaksrelease of “Collateral Murder”if you would like to witness the unintended, adverse effects of ‘doing nothing.’ Consider, also, what happens to those who reveal these crimes in the person of Bradley Manning,recently sentenced to 35 years in prisonfor making us aware of the truth. We have analyzed our own traffic out of Arlington Virginia, and see plenty of military and government (e.g. .mil, dhs.gov, etc) domain networks visiting our website; unsurprisingly so, considering recent revelations:US Military, Monsanto TargetingGMOActivists and Independent Scientists, and the fact that Anonymous finds some of our work worth re-posting

The following words of wisdom should help to fully contextualize and explain this point:

Krishnamurti: “It is no measure of health to be well adjusted to a profoundly sick society.”

Marin Luther King: “It really boils down to this: that all life is interrelated. We are all caught in an inescapable network of mutuality, tied into a single garment of destiny. Whatever affects one directly, affects all indirectly. We are made to live together because of the interrelated structure of reality.”

George Orwell: “Pacifism is objectively pro-fascist. This is elementary common sense. If you hamper the war effort of one side, you automatically help out that of the other. Nor is there any real way of remaining outside such a war as the present one.”

If you choose to believe that by standing back and saying and doing nothing when our country prepares togo to war(which will cause the ‘collateral’ deaths of many men, women and children)in your nameis not without consequence, or is not a choice, you are wrong.

We agree with MariaRodalethat biotech companies are guilty of the mass chemical poisoning of exposed populations, with the EPA recently responding by increasing the legal allowable levels of agrichemicals like Roundup in our food. Biotech corporations such as Monsanto have created a patent- and profit-driven agricultural system which requires the wholesale destruction of biodiversity (and human health) through the use of broad spectrum biocides, and that because the adverse human human health effects are now so well-known that it can be construed as intentional harm.

In the same way that Monsanto’s Agent Orange was used to carpet-bomb the jungles of Vietnam, millions of acres of the arable land on our biosphere are being similarlycarpet bombed with chemicals likeRoundupthat kill, harm and/or contaminate all plant, bacterial and animal life it touches, is known tocause human birth defects,destroys the present and future fertility of the soil, and has recently been demonstrated to not only befound in most air, water and rain samplestested, butcarcinogenic in the parts-per-trillion range. These biocides are failing so miserably to do their job correctly (kill all plant life except their GM plants), that companies like Dow are actuallyresurrecting Agent Orange ingredients, such as 2,4-D, to ratchet up the chemical war against competing plant life which, thank God, have found a way to not die when faced with the chemical apocalypse (no hyperbole here folks) orchestrated by global chemical and biotech companies in the name of not just profit but control of the food supply, and by implication the world’s populations. So, given that the same companies that once crafted chemical weapons of war are now in control of our food supply, and have populated many high offices within our government with ex-employees, including regulatory bodies meant to protect us from harm, is MariaRodale’s comparison to what we are experiencing in our own backyard to the intentional use of chemical weapons in Syria against their populations really that far fetched?

So, yes, GreenMedInfo.com officially stands against this and any other military engagement of its kind, and encourages our followers to petition the Congress to make the only right decision at this critical juncture, in addition toasking Obama to either back off from his war-mongering or return his Nobel Peace prize immediately.If you need more information as to why this is a serious request, consider that Obama has willfully acted as a legal instrument in making it now possible for American citizens to be held indefinitely without trial,renditionedandeven killed with a drone. This is fact and not fiction — like the idea that we would like to attack Syria because of a humanitarian concern over the use of chemical weapons (learn aboutour useofdepleted uranium in Iraq, and you will understand why this is pure propaganda).

With that said, I think it would be best to leave you to read MaryRodale’sletter in its entirety, so you can draw you own opinion as to whether it was “outrageous,” “idiotic,” “atrocious,” or motivated by a compassionate, intelligent mind, as we believe. her letter here:http://www.huffingtonpost.com/maria-rodale/an-open-letter-to-preside_b_3865116.html

'Obama Wants to Bomb Syria, But Monsanto Is Already Carpet-Bombing Us' has no comments