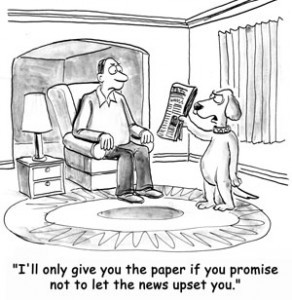 When I was young, I felt a need to understand politics, and I spent time studying. But as time progressed, I received diminishing returns on that investment. And in the past few years, I have given it up altogether.

These days, my concern with politics is limited to things like these:

Beyond that, I’m really not interested. I see the headlines, but I seldom read the stories. And I’m very happy saying, “I haven’t looked into it,” when people ask my opinion on the day’s ‘news.’

#5: It eats up a horrifying amount of time and energy

Seriously, start counting the number of hours you spend on this stuff. How many hours listening to political radio, watching political TV, and reading political newspapers?

Then start thinking about the intense energy you spend on it. We all have limited reserves of energy; do you really believe that politics is the highest and best use for yours? What about using your energy to build your business? Or to nurture your children? Or to help a neighbor?There must be a dozen things that are more importantthan obsessing over the votes of congressmen or Supreme Court judges.

If imagining yourself dumping politics makes you feel bad, you probably should dump it.

Try it: Imagine your life, devoid of all politics. How does it make you feel? Empty? Forsaken?

The truth is that millions of us are addicted to politics. People can’t pull themselves away from it – it’s the script that runs in the back of their minds 24/7.

The political addiction is so bad that even strongly religious people spend more time on politics than they do on God. Politics is the obsession of the age.

#3: It doesn’t change anything

There was a popular bumper sticker in the 60s that read:If voting changed anything, they’d make it illegal.

Let’s be honest and admit that the bumper sticker was true. Even the best examples – such as Reagan on the right or Obama on the left – have failed to change much. Government is bigger than ever, the US government isinvolved in more warsthan ever, andthe Constitution is being trashed in more ways than ever before. This is progress?

And what of the vaunted elections that they always promote? Personally, I think Alvin Toffler was right when he called them “reassurance rituals.” But, that aside, it is certain that elections are tightly controlled. In the US, two parties firmly control who gets on a ballot and who doesn’t. Everything is scripted; everything requires approval of the party. (The situation is slightly less bad in Europe.)

And please understand that ‘the government’ is far more than 600 faces in DC – it is millions of people in thousands of offices, all pulling together to get more of your money and to spend it upon themselves and their departments.

But even while politics doesn’t actually change much, it does keep everyone locked inside the system and servicing it.To illustrate, here’s a quote I never could forget, and that I hope you’ll never forget either:

Let them march all they want, so long as they continue to pay their taxes.

So long as everyone obeys the government, why should it care about their complaints? Americans are nearly 100% obedient, so why should the government bother changing anything at all? There is no need.

Politics doesn’t change anything, because its actual goal is to keep the populace reassured and compliant. And in this it has succeeded brilliantly.

Here’s a passage from my novel,A Lodging of Wayfaring Men, that expressed this idea:

Coercion is thesine qua nonof politics; the thing, without which, politics would not be politics. Indeed, if you remove coercion, politics becomes something else – economics.

Politics cannot exist without force. In the end, it rests on violence. No matter how much they color everything red, white, and blue, violence or the threat of violence underpins it all. As Jim Rogers once wrote, “Somewhere in every process of taxation, a pistol is involved.”

Politics – government – is based upon a single transaction: Taking money from people against their will. Everything else they do falls apart without that.

You may think me rude for pointing this out, or you may come up with justifications for it, but the statement stands: Governments take money that they didn’t earn, by one type of coercion or another. If not, taxation would be voluntary and government would be just another business.

#1: Politics is a relic of a barbaric past

So, what else from two thousand years before the Pyramids still rules the lives of men?

If there is any example on Earth of humans failing to evolve, this has to be it.

Men no longer pull plows. They no longer start fires with flint. Nor do they pull sleds or wooden-wheeled carts or rely upon animals for power. We have learned to write, to invent, to navigate, to cover immense distances, to drive, to fly, to reach into the heavens…

And yet this one relic of a primitive past remains. And please don’t tell me that it remains because it is good – people complain about government more than they complain about cancer.

To illustrate government’s barbaric nature, consider this: Thousands of people like me would like to experiment with different ways of living, but we are forbidden. No one is permitted to leave the game. If you try, large armed men will assault you and lock you in a cage, or perhaps they will merely steal your money from the bank you entrusted it to. But in either case, government sycophants will solemnly inform the world that you are an evil-doer.

No exit is permitted and all escape attempts are met with violence. How is this not primitive barbarity?

So, there you have it. You’re big boys and girls and you can make your own decisions, but I have to tell you: I am ever so happy with mine. I am less stressed, more productive, and a clearer thinker.

Every so often, a friend asks me to examine a political issue. And, nearly always, I politely decline; it makes me feel the same as when my mother wanted me to eat liver.

'Top 5 Reasons I Stopped Caring About Politics' has no comments