Manipulating Magnetic Fields to Improve the Efficiency of Induction Motors

In Greek theatre, the term perepiteia means an action that has the opposite effect of what its doer intended.

Thane Heins of Potential Difference thinks he has stumbled upon a way of making electric induction motors work, at the very least, more efficiently. At most, he may have found a way to manipulate magnetic fields so that instead of slowing down a generator (according to Lenz’s law in physics) it speeds it up.
“The invention, at its very least, could moderately improve the efficiency of induction motors, used in everything from electric cars to ceiling fans. At best it means a way of tapping the mysterious powers of electromagnetic fields to produce more work out of less effort, seemingly creating electricity from nothing. “Imagine a battery system in an all-electric car that can be recharged almost exclusively by braking and accelerating, or what Heins calls ‘regenerative acceleration.’ No charging from the grid. No assistance from gasoline. No cost of fuelling up. No way, say the skeptics.” (Toronto Star; Feb. 4, 2008) 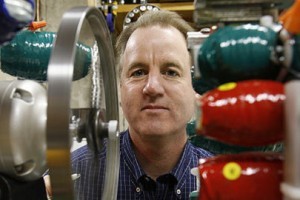 -The ReGenX generator explained; how it differs from a regular car motor

-Why hasn’t a big company snapped up this innovative technology?

–Myths and Truths Regarding Energy and Electric Power Generation

-Thane lives off the grid, powering his house with a 5 kW Honda generator; pros, cons and the perfect off grid dream technology

-If this technology is viable and in production, does this mean the end of the fossil fuel industry (i.e. oil, gas, coal, etc.)?

-How can Mr. Heins ensure that other companies / competitors would not be able to reverse engineer his motor design, and use it without a license / approval from the inventor?
-Since this invention is so revolutionary, why would thebig industries not buy the right to the technology, and then “bury” it to continue their antiquated technology?
-How can the detrimental effects from the EMF’s produced by the electric motor in the car be minimized?

-Thane talks about Karma Funding; how the investors in his company will make a profit

-Would you like to become a Karma Investor? Email Thane at [email protected]

thane heins and energy as free as it gets so far, september 8, 2015

'Thane Heins – Changing the Consciousness Within the Energy Paradigm – September 8, 2015' have 5 comments