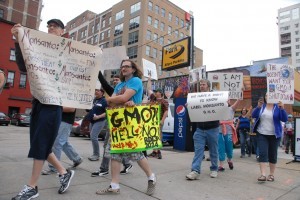 The March Against Monsanto has been a major success, generating mass awareness across the nation and the globe alike as millions marched into the streets of major cities and towns to voice their opposition against Monsanto’s monopoly on the food supply at large. While I was travelling away from my new headquarters in Austin, Texas, I was able to head to the local March Against Monsanto here in Philadelphia, Pennsylvania and catch as nearly 1,000 individuals marched right down one of the busiest streets in the city.

I was also able to score a number of interviews with well-known food activists, celebrities, police, and others. I was overwhelmed by the number of activists who funneled into the protest as it went on as well, growing into the thousands like a snowball gaining momentum and size. There was also a great degree of support for NaturalSociety and myself from concerned citizens who were passing out our articles and spreading the word. On more than one occasion, large groups of those passing through came by and asked what the march was all about.

The curious were met with sincere answers, and were warned that they were likely supporting GMO juggernaut Monsanto through eating processed junk and fast food — a company that, as I detailed via a borrowed bullhorn from a protester to the crowd, has been caught running ‘slave-like’ rings in South America to harvest their GMO crops. And that’s not even getting into the peer-reviewed health effects that we know of regarding the consumption of Roundup-drenched GMO foods.

I will be posting more videos throughout today and over the next few days documenting the March Against Monsanto here in Philadelphia and the amazing acts of activism that I was able to record on video with the help of Mike Barrett and other crew members aiding me.

Overall, the March Against Monsanto has been a huge success. Stay tuned for some creative activism concepts here at NaturalSociety that we’ve been working on behind the scenes.
Anthony is the Editor of NaturalSociety, producer, consultant, and seeker of truth. Anthony’s work has been read by millions worldwide and is routinely featured on major alternative and mainstream news website alike, like the powerful Drudge Report, NaturalNews, Infowars, and many others. Anthony has appeared, oftentimes routinely, on programs like Russia Today (RT), The Alex Jones Show, Coast to Coast AM, and others. Anthony is also a founding member of Natural Attitude and the creator of the independent political website Storyleak

How did it go in your city? Did you go to the march? Leave a comment and let us know about how your city covered the event, how many showed up, etc.

'March Against Monsanto A Major Success!' has no comments