-A listener calls in and reads a fun poem

-Did you catch our interview this week with Phil Thomas? We’ve have some great feedback from listeners, so check it out

-Patrick talks about his spiritual path, Eckankar and shares the HU

-Becoming a co-creator with God

-From Atom Bergstrom:Mainstream medicine now use homeopathy under their new name HORMESIS (pronounced horm-ee-sis) without giving credit to Samuel Hahnemann, the official founder of homeopathy.

-Patrick receives a funny phone call to which a listener responds:Not only was Murray amazing but so were you. You are such a good interviewer! How you came up with those questions was crazy good to listen to. You are right where you are supposed to be.

-Carol shares a recipe for an old European Christmas hot drink:Combine unsweetened juices of orange, apple cider,lemon and pineapple (ships brought pineapples from the tropics to Europe) in a large pot. Add whole cloves and ground spices such as nutmeg, allspice, ginger and cinnamon. Simmer slowly to blend flavors. In separate small pot cook thinly sliced ginger in water. I use several inches of the ginger. After the ginger has made a strong tea, add contents of that pot to the wassail. Float orange slices and cinnamon sticks on top. Serve in little punch cups with ginger and orange pieces. Add a cinnamon stick in each cup so folks can use it to spoon out the ginger at the bottom for a bright spicey chew. Great healthy drink.

-How to use iodine 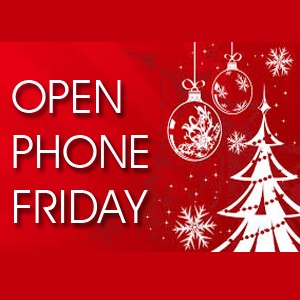 open phones with you and patrick, december 19, 2014 hour one