Root Cause: Keep the Bad Publicity Coming, It Drives People to Do Their Own Research and Sparks Curiosity to Actually Watch the Film

Don’t you just love “unbiased” investigative reporting? We’re starting to really enjoy the types of articles below in which the sole intention is to immediately jump on the bandwagon of the other side without presenting any facts whatsoever.

If you’ve followed our work here at One Radio Network, you will well know that we have been interviewing prominent dentists for over a decade who have talked with us extensively about the dangers of root canals. This is not a new health whim. So let’s start with a critical thinking exercise: Why in the world would any dentist embrace the idea that root canals could potentially cause chronic health problems, especially when a large chunk of their income comes from root canals? Sounds a bit suicidal business-wise to us, but then again, we have interviewed a great many doctors who truly embrace “do no harm” when it comes to medicine. Yes, there are some docs who do have a moral code AND who do their own research. Unfortunately, many of them are run out of business or run out of the country. The Late Great Dr. Hal Huggins was one of those dentists. He blew the whistle on mercury fillings back in 1973 to his own detriment. He was bullied for decades from the ADA. Fortunately for him, they didn’t break him, but he made it his life’s work to spread the word about dangerous dental procedures and the mouth/body connection. 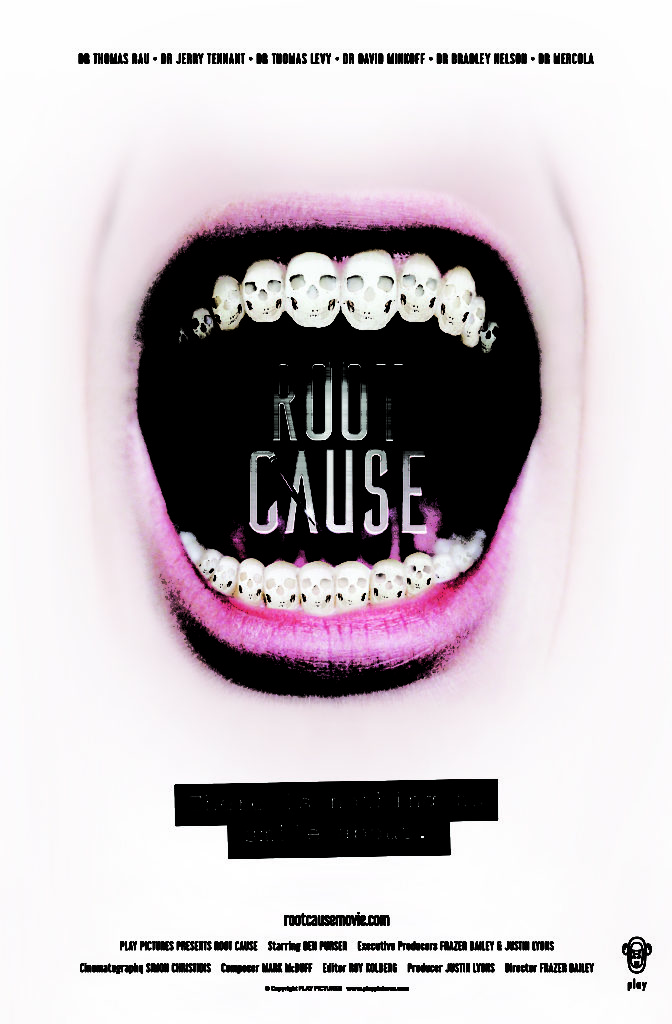 Now here we are in 2019 and Frazer Bailey has produced the incredibly fine film, Root Cause, backed by some pretty hardcore evidence about the dangers of root canals. We highly recommend you watching it although you won’t find it on Netflix because they’ve bowed down to “the Boys”. And the stream of bad publicity attempting to discredit him is flowing fast. Fortunately, as we know, there’s no such thing as bad publicity if it makes people go watch the film and at the very least, ask more questions. As for us, we endorse the film. We have no financial interest in the film and have nothing to gain, but the snickers from detractors.

So let’s address the less than well researched written article below. No offense to the author; this is not an attack on him personally. It is one of many biased reviews, yet represents them all. Let’s dissect it now shall we.

The author starts by stating: “A new documentary questioning the safety of root canals has drawn the ire of dentists and endodontists who say it is based on information long debunked.” Okay, so they say it’s long been debunked, but did the author ask for references? If he did and if he researched them, he certainly didn’t include the information. He just BELIEVED it was truth because he was told it. It’s always a good idea to remain objective and do one’s own research. If that had been the case, perhaps the author would have run across this piece of research and maybe even the work of Dr. Weston A. Price.

He then quotes one dentist, just one, Dr. Fred Barnett. Sorry Charlie, you’ll have to come up with more than one opinion, but we understand, you did reach out to the producer of Root Cause, so hey, you had one from each side so to say. On the other hand, Root Cause, had more than a handful of experts on this subject interviewed for the film. And as for Dr. Barnett saying, “Oh my god, if something like this were in fact the case, what a catastrophe, no one wants to do a procedure that’s going to cause anyone any type of harm or injury. No one is trying to cover up anything.” He is most probably not being disingenuous in saying that. We would like to think that most docs truly care about the well being of their patients. On the other hand, with 15 million of these procedures being performed annually in the US bringing in about 13 and a half BILLION dollars, well let’s just say, sometimes one wouldn’t want to believe the worst. And yes, money does make the world go around.

So having said that, we’d like to thank all the writers for their critical reviews because there’s no such thing as bad publicity and at the very least sparks curiosity to check out Frazer’s work and the film. Lastly, this commentary isn’t meant to belittle anyone or poke fun. My intention is to remind everyone to strive to become critical thinkers and that it’s okay to ask questions.

A new documentary questioning the safety of root canals has drawn the ire of dentists and endodontists who say it is based on information long debunked.

“Root Cause,” released earlier this year, chronicles an Australian filmmaker’s search to find the cause of his chronic fatigue, anxiety and insomnia. Eventually, Frazer Bailey blames his health problems on a root canal procedure he received years ago, thanks to the help of an obscure piece of scientific apparatus and some holistic dentists.

Along the way, the 72-minute film claims that root canals cause an array of alarming health problems, including cancer, heart disease and chronic illness. It urges viewers to have any root-canal-treated teeth removed and replaced with a ceramic bridge or zirconia implant.

One of the more eye-popping claims is delivered just nine minutes into the film. A holistic dentist asks viewers, “What if I could tell you that 98 percent of women who have breast cancer have a root canal tooth on the same side as their breast cancer?”

But dental organizations across the United States – including both dental schools and membership groups – have rebuked the film’s claims, noting they are not based on valid scientific research.

The film’s unsubstantiated claims hold the potential to “spread like wildfire” – not unlike the falsehoods passed along by anti-vaxxers, said Dr. Fred Barnett, chair of dentistry and program director of endodontics at Einstein Healthcare Network in Philadelphia.

“Oh my god, if something like this were in fact the case, what a catastrophe,” Barnett said. “No one wants to do a procedure that’s going to cause anyone any type of harm or injury. No one is trying to cover up anything.

“Let’s look at the evidence and see what’s out there. There hasn’t been one valid medical or scientific study published anywhere that can show causation between having a root canal and developing cancer.”

“It’s very difficult to combat these types of claims,” Barnett said. “No one is going to allow a movie to be made, like a documentary, to go point by point against it. There’s little that can be done.”

A POTENTIAL FOR PUBLIC HARM?

Despite the opposition, “Root Cause” remains available on Amazon, Vimeo and iTunes. It is no longer available on Netflix, but it remains unclear why the streaming service removed it.

Justin Lyons, the film’s producer, claimed Netflix removed the documentary due to public pressure from dental associations. The streaming service did not respond to multiple requests for comment.

A Vimeo spokesman said the company has left “Root Cause” available on its On Demand service because it is an open platform that allows creators to sell their videos. Vimeo On Demand does not solicit or screen for content and only removes content when it violates its service terms or guidelines.

“The availability of any content on Vimeo On Demand (or elsewhere on our platform) should not be viewed as endorsement of any statement therein, spokesman Jordan Smith said in an email.

Amazon and Apple did not respond to requests for comment.

Root canals are a common dental procedure that save a patient’s natural tooth and alleviates pain. They eliminate the infected pulp in a tooth and replace it with an inert material to prevent reinfection. The procedure typically costs hundreds of dollars.

“Currently, about 25 million new endodontic treatments, including root canals, are performed each year, safely and effectively, with none of the side effects referenced in this movie,” according to the AAE.

The film’s premise is “based on junk science and faulty testing conducted more than 100 years ago,” that was first debunked in the 1950s, according to the AAE. Multitudes of scientific studies and peer-reviewed materials support the safety and efficacy of root canals.

Lyons, who co-produced the film with Bailey, stood by the documentary, alleging that the dental groups are hiding the truth to protect mass profits.

“‘Root Cause’ could be considered controversial by some – and by some I mean endodontists,” Lyons wrote in an email. “But at the end of the day all we set out to do was make a film to start a conversation. Surely all this does is confirm the question, are root canals worth further scrutiny?”

‘I DON’T THINK THIS WAS BY MISTAKE’

The film includes commentary by several alternative medicine physicians who have taken controversial stances on various health topics ranging from vaccines to Ebola treatments. Perhaps none are better known than Dr. Joseph Mercola, an author who runs a popular alternative health website that has decried Cheerios, fluoride, vaccines and, of course, root canals.

Many of the claims included in “Root Cause” have circulated online for some time, including alleged links between cancer and the dental procedure.

Barnett particularly took issue with the film repeatedly – and misleadingly – linking breast cancer to root canals, stressing that even the strongest correlations do not necessarily mean there is causation.

In addition to having root canals, it’s also highly likely that most breast cancer patients have been vaccinated, completed kindergarten and eaten cereal and milk during their lives, Barnett said.

“If you want to know if there’s a connection between root canal treatment and cancer, you look at the large population of patients who had root canal treatment,” Barnett said. “Follow them up and see what percentage of those develop cancer. The answer to this question is that it’s no different than what typically occurs in the general population.”

Essentially, he said, the filmmakers took a backward approach that any credible scientist would avoid.

“If they actually wanted to tell the truth to the public, they would never frame it that way,” Barnett said. “All it does is it creates an implication of very serious outcomes on a procedure that really has been shown to be incredibly safe and effective. I don’t think this was by mistake. This was an intentionally deceptive way of presenting it.”

Check out our podcasts about root canals

'Root Cause: Keep the Bad Publicity Coming, It Drives People to Do Their Own Research and Sparks Curiosity to Actually Watch the Film' has no comments