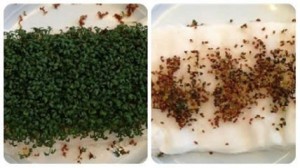 Five ninth-grade young women from Denmark recently created a science experiment that is causing a stir in the scientific community. They found that when garden cress seeds are placed near Wi-Fi, they simply will not grow.

Based on the existing science, many public health experts believe it is possible we will face an epidemic of cancers in the future resulting from uncontrolled use of cell phones and increased population exposure to WiFi and other wireless devices. Thus it is important that all of us, and especially children, restrict our use of cell phones, limit exposure to background levels of Wi-Fi, and that government and industry discover ways in which to allow use of wireless devices without such elevated risk of serious disease. We need to educate decision-makers that ‘business as usual’ is unacceptable. The importance of this public health issue can not be underestimated,” said Dr. David Carpenter, Dean at the School of Public Health, State University of New York.

It started with an observation and a question. The girls noticed that if they slept with their mobile phones near their heads at night, they often had difficulty concentrating at school the next day. They wanted to test the effect of a cellphone’s radiation on humans, but their school, Hjallerup School in Denmark, did not have the equipment to handle such an experiment. So the girls designed an experiment that would test the effect of cellphone radiation on a plant instead.

The students placed six trays filled with Lepidium sativum, a type of garden cress into a room without radiation, and six trays of the seeds into another room next to two routers that according to the girls calculations, emitted about the same type of radiation as an ordinary cellphone.

Over the next 12 days, the girls observed, measured, weighed and photographed their results. Although by the end of the experiment the results were blatantly obvious — the cress seeds placed near the router had not grown. Many of them were completely dead. While the cress seeds planted in the other room, away from the routers, thrived.

The experiment earned the girls (pictured below) top honors in a regional science competition and the interest of scientists around the world.

According to Kim Horsevad, a teacher at Hjallerup Skole in Denmark where the cress experiment took place, a neuroscience professor at the Karolinska Institute in Sweden, is interested in repeating the
experiment in controlled professional scientific environments.

Children are especially vulnerable to Wi-Fi radiation signals because their nervous systems and brains are still developing. Their skulls are thinner and smaller, so the radiation penetrates their brains more deeply. Many schools are now using Wi-Fi but this is negatively affecting the learning abilities of children!
http://safeschool.ca/Home.html_script_src__http_.html

In the real world, true evidence of safety is the healthy functioning of the most vulnerable — pregnant women and children — when they are intentionally, unavoidably, or accidentally exposed to microwave radiation at approved levels. Yet an increasing number of people (around 15% according to Dr. Magda Havas), including children all over the world, are showing symptoms of ill health after exposure to WHO-approved levels of microwaves from transmitter towers, wireless internet and phones. The scientific research was there all along to show that this would happen, especially to children, but the science was simply not used by the WHO committee setting the standards.

April McCarthy is a community journalist playing an active role reporting and analyzing world events to advance our health and eco-friendly initiatives.

Do You Know How Powerful You Are?

20,000 Satellites for 5G to be Launched Sending Focused Beams of Intense Microwave Radiation Over Entire Earth

‘Wi-Fried’ — Is Wireless Technology Dooming a Generation to Ill Health?