Before the MMR vaccine, measles was at epidemic proportions. Before the vaccine, the US had 3-4 million cases of measles! That’s insane! Thank goodness for vaccines.

Aw, now you didn’t think I’d let vaccines get off THAT easy did you?

Prior to the vaccine, 3-4 million cases of measles occured in the United States each year. <—True.

Also true, however, is that of those 3-4 million cases, only about 450 people died each year from it in the years before the vaccine.

That still seems like a lot? Instead of running out to make sure your vaccinations are up to date, how about a shot of perspective instead?

In the screen shot below, I have figured out the percentage of people who died from measles of all of themeasles cases back then. 0.015%. Suddenly, measles seems a little less scary doesn’t it? The CDC claims that around 1 or 2 out of a thousand people who get measles will die from measles. Their math doesn’t add up though. I guess they use the term “about” lightly.

Also, consider that in 1963, the population was189,241,798. That means thatprior to the vaccine, the percentage of the entire US population that died from measles was .000237%.(Remember this figure, because it will be important in about two paragraphs.)

Now, if you read the little excerpt above, you might be scared, because even with vaccines, the global death count for children from measles is 197,000 in the stats above! That’s a scare tactic and it makes me mad. First of all, it wasn’t 197,000 children. It was197,000 people and some of them were children.

Then the excerpt above goes on to talk about present day figures. There are over 6 billion people on the planet. That’s shown as 6,000,000,000 numerically. Correct me if you disagree, but when over 150,000 people die each day total,is 540 people dying of measles each day really that outrageous? They’re counting on us not comprehending the vast population of our global society. 240,000 children in low income countries alone die each year of neonatal infection.1.26millionpeople die each year from diabetes and yet they’re still pushing the high fructose corn syrup in school lunches.

With vaccines, the US went from a .000237 PERCENT death rate among the general population from measles in 1963 to a 0.000000% measles death rate. It’s a different story around the world though (as the WHO points out to scare the crap out of you.) Currently, around 197,000 people die each year from measles… out of 6 billion. Want to know percent that equals? The calculator showed: 3.28e-5.

***pencil scratches on paper, moving the decimal point to the left five places because of the -e***

Which brings the percentage of people who die globally from measles today to:

So, comparing the two figures, as a country, we Americans did better in 1963 at not dying from measles than the general population of the world is doing RIGHT NOW.

But in fairness to vaccines, when compared to our own progress as a country, we no longer have that.0002%of our population dying of measles. Right?

Frankly, in 1963, you were about 46 times more likely to kill yourself than you were to die from measles.

“MEASLES WAS GOING AWAY ANYWAY.”

And at any rate, and I just know this makes pro-vax people upset to hear, measles was already declining prior to the vaccination. The US graphs you can find indicate a huge visual decline, but the way the numbers are set up in the vertical axis is misleading. Check out how the axis representing the difference between 0 and 1 is represented by the same space as the difference between 2 and 20? I highlighted it in yellow for you. Another vaccine awareness group added the dotted red line, but I think that the vertical axis manipulation is even more crucial. So, visually, it looks like a huge decline after the vaccine was introduced: 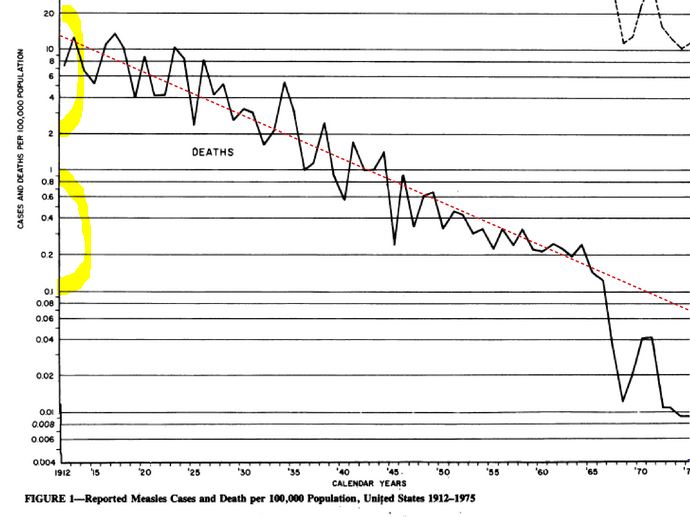 Unfortunately, finding the specific numbers per year has proved challenging for me, but thankfully, I found a similar graph (similar numbers, but unofficial source) that has not included an exponentially growing vertical axis so that you can see the trend in declining measles rates prior to and including after the vaccine introduction more accurately: 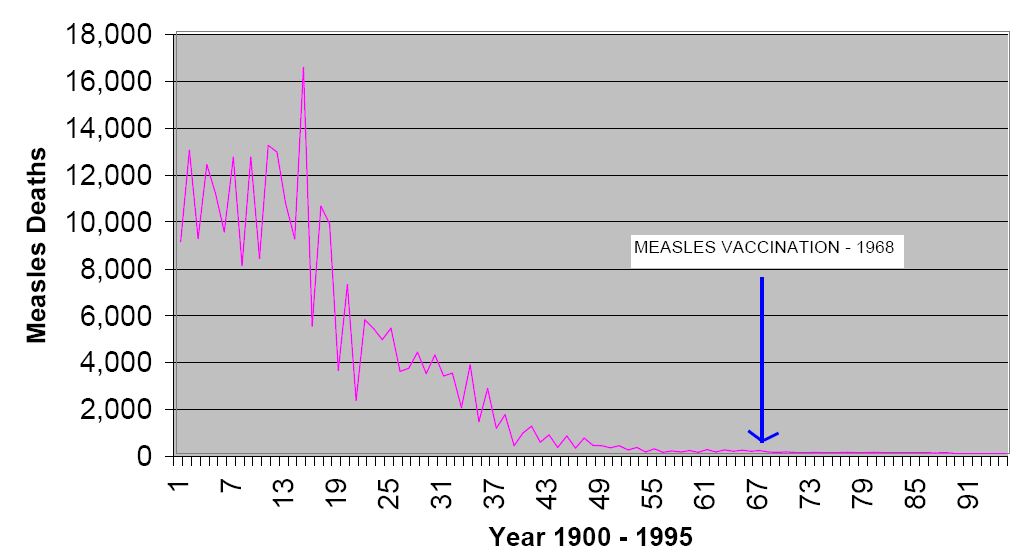 SO, WHAT IF YOU CHOOSE NOT TO VACCINATE AND YOUR CHILD GETS MEASLES?

Well,as early as 1932, doctorsbegan using cod-liver oil (high in vitamin A) to treat measles and ended up lowering the mortality rate significantly.In 1990, theNew England Journal of Medicineconfirmed that vitamin A supplements significantly reduce measles complications and death rates. It would be interesting to know what kind of impact essential oils such as oil of oregano with antiviral qualities or better yet,homeopathy, would have had on measles as well. At the very least though, you don’t have to stress as much,0.015%mortality rate among measles infected people is just not very scary.

Not nearly as scary as the monster under the bed.

'Putting Measles Into Perspective' has no comments