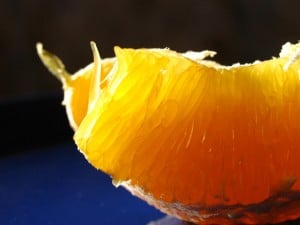 Most mammals manufacture their own Vitamin C except for primates (excluding monkeys), guinea pigs, and humans. Unlike our mammal relatives, humans lack the enzyme necessary to produce ascorbic acid in the liver from glucose.

Thus, it is vital that we consume our Vitamin C on a daily basis.

Up until recently, humans consumed large quantities of Vitamin C via fruits and plants—much more than the ridiculously low RDI daily requirement of 60 mg. This low standard was found to be the minimal amount of Vitamin C to advert symptoms of scurvy.

However, alarming flaws in this wisdom have been exposed in the book ‘Ascorbate: The Science of Vitamin C’ by Dr. Steve Hickey and Dr. Hilary Roberts. They note that irrefutable flaws are due to what is known as “Half-life”.

Half-life is the scientific term that refers to a substances value as it decreases over time and the time at which the quantity is half its original value. Half-life is always taken into account for medications and is what determines the interval at which the medication should be taken to keep a constant amount of the med in your system.

In other words, half-life means how long it takes until the substance is no longer effective in your body.

RDA is NOT Enough!

This also applies to nutrition. In human beings, the half-life of Vitamin C is thirty minutes after ingestion. This was not taken into account in the research to determine the saturation of Vitamin C in the body.

Furthermore, the research used to determine the RDA involved only extremely small sample groups of which would normally be considered invalid in any other research studies.

Unfortunately, too many people are under the understanding that if they get the RDA of Vitamin C (or any other nutrient), they are getting sufficient nutrition for the health of their body.

This is absolutely not so as the RDA is extremely misleading.

The RDA alsodoesn’ttake in account the use of NSAIDS (aspirin, ibuprofen, etc), toxins from air pollution, stress, pharmaceutical drugs, smokers, diabetics, menopausal women, heart conditions, those with cancer, etc, all of these mentioned need substantially more Vitamin C than the RDA.

Dr. Linus Pauling, Nobel-prize winner in chemistry, pioneered much research regarding Vitamin C. And through-out decades of research, he had suggested that the human body requires around 2000 mg – 20,000 mg of Vitamin C daily—more in those with serious health concerns such as cancer.

He, himself, took up to 25 grams (25,000 mg) of Vitamin C per day for many years without any problems, and continued working on his research until the day died, at the age of ninety-six!

Perhaps his research should get a bit more attention!

Well maybe things are starting change, as slow as it may be. Research is now showing that, indeed, the human body requires far higher doses of Vitamin C than what was previously thought.

is a chiropractor physician who also holds a Bachelor of Science degree in Human Biology, and a minor in Medical Research. She is a life-long athlete who after curing herself 100% naturally from MS and anxiety, became an avid nutrition health researcher/promoter. She has been featured in many Health magazines, and has been a guest on radio talk shows in the USA, Canada, United Kingdom, and Australia. She is the author of Healthcare Freedom Revolution: Exposing the Lies, Deceit and Greed of the Medical Profession, Founder of Online Holistic Health Website/Blog, and a contributing writer for other popular informative health website/blogs.

'Vitamin C: It’s All About The Half-Life' has no comments