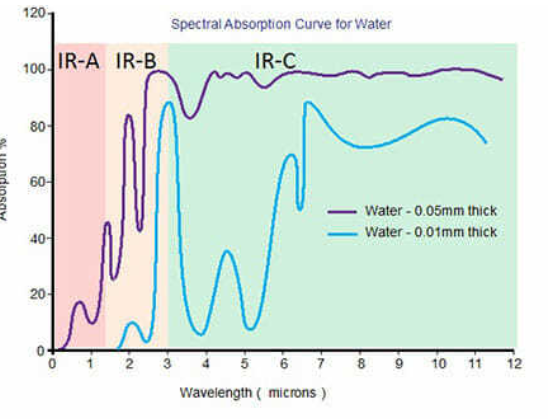 Penetration Depth
The chart below shows the penetration depth for infrared wavelengths produced by an incandescent heat lamp. Far infrared (IR-C = 3000 – 10000 nm) wavelengths are absorbed by water and penetrate less than 1 millimeter. Mid infrared (IR-B = 1400 – 3000 nm) and near infrared (IR-A = 750 – 1400 nm) have greater penetrating power and the radiant heat is absorbed in a larger skin volume.

Surface Area
Many infrared saunas emit heat in a wide surface area evenly distributing the heat throughout the sauna enclosure, where heat lamp saunas focus the heat on a smaller surface area.
Smaller surface area combined with increased penetration depth results in a superior sweat therapy and detoxification experience.
Photonic Stimulation
Mitochondria photonic stimulation, or photobiomodulation light therapy occurs in the visible light and near infrared range between 380 – 1200 nm. Photons are packets of light that stimulate cytochrome-c oxidase, an enzyme associated with the third part of the electron transport chain inside the mitochondria. Cytochrome-c oxidase in turn causes increased levels of ATP synthase, which produces a cascade of beneficial effects at the cell level.
Improved mitochondria health from photonic stimulation mimics the effects of optimizing thyroid function, where widespread systemic positive health effects are reported. Here is a link to an article by Ari Whitten on the health effects of red and near infrared light. (Note: Whitten may need to provide another update to his article regarding biphasic dose response. More on this topic below.)
Power Density
Power density is a measurement of output power over a specific area of the body, usually measured in watts per meter squared (W/m2) or milliWatts per centimeter squared (mW/cm2). (Note: W/m2 x .1 = mW/cm2.)
Power density measurements for the Spectra are shown below. The readings are 66 mW/cm2 at 24 inch distance, 121.6 mW/cm2 at 18 inches, and 144.6 mW/cm2 at 12 inches. (Note: TES 1333 Solar Power Meter, Spectral Response 400 – 1100 nm.)

The power density measurements in the above picture are produced by pointing the TES power meter at the  second lamp from the bottom of the sauna. In this case, the power meter is mostly measuring the output from the lowest 3 lamps, so adding or removing the top 2 lamps does not affect the readings much due to the directional nature of the power meter. For comparison the picture below shows power density measurements for a single General Electric heat lamp. The readings are 33.57 mW/cm2 at 24 inch distance, 57.07 mW/cm2 at 18 inches, and 100.4 mW/cm2 at 12 inches.

Total Energy and Dosage:
Energy is a measurement expressed as Joules (J), and is equal to power density in Watts (W) over a specific amount of time. Dosage, also sometimes called fluence, represents the area of the body over which the energy is applied.

Dosage =  Joules/cm2
For example, looking at the Spectra sauna power density of 144.6 mW/cm2 at 12 inch distance, the dosage over 60 seconds can be calculated as follows, where  1 milliWatt = .001 Watts
Dosage = 144.6 mW/cm2 x 60 x .001 = 8.68 J/cm2
Biphasic Dose Response: Fact, Human Error, or Marketing Hype?
In the marketing literature for near infrared devices including LED light panels and laser devices, many times you will find claims about needing to get “just the right dose” of near infrared light and “avoid too much exposure”. This is usually called the biphasic dose response. Michael Hamblin, PhD is one of the leading researchers on near infrared light and has written several hundred articles on the subject. Here is what he has to say about dosage and the biphasic dose response.
“What we don’t really know is can you overdose the body on the total number of joules, or is it only when it’s
concentrated. It’s not common in humans, I have to say. Most of the studies showing a convincing biphasic dose response have been done in cells or animals. Ten minutes in a Novothor will give you 120000 joules of energy. An hour of sunbathing, and you will get a million joules of optical energy, because the area is in the hundreds of square centimeters.” – Michael Hamblin
Here is a link describing the power density of the sun.
“The sun is the source of heat and energy for the earth. The solar output on the earth is called the power density. The power density of the sun’s radiation on the surface of the earth is approximately 1.4 kW/m2. This value varies slightly throughout the year but by no more than 0.1 percent. One reason for this variation is the changing earth-sun distance. This distance varies by about six percent throughout the year, causing the power density to range from about 1.308 kW/m2 to 1.398 kW/m2.”
Let us convert the high end number 1.398 kW/m2 to mW/cm2, where 1 Watt = .001 kW, and W/m2 x .1 = mW/cm2.
Power density of the sun at sea level = 1.398 kW/m2 = 1398 W/m2 = 139.8 mW/cm2
Power density of the Spectra sauna at 12 inch distance = 144.6 mW/cm2
Are you afraid of the sun? Is the biphasic dose response a case of fact, human error, or marketing hype? Does it only apply to laser and LED devices? The reader is welcome to come to their own conclusions.