On Friday the grim reality of more job losses for Americans
was plastered across headlines.  What makes this even more distressing
is this is occurring during what is supposed to be a recovery.  Yet most
Americans realize that there is no recovery outside of Wall Street.  If
anything, things have gotten progressively worse as foreclosures are
still near their peak, bankruptcies
are rising, and wages are stuck or reversing backwards.  The government
in conjunction with banking lobbyist and the Fed has decided to punish
Americans who actually want to save their money.  How?  By allowing
interest rates to be artificially low thus pushing savings account
interest rates to all time lows.  Current rates are low not because of a
healthy economy, but because most people realize that the economy is
still on a shaky foundation.

Take a look at the 6 month Treasury bill interest rate: 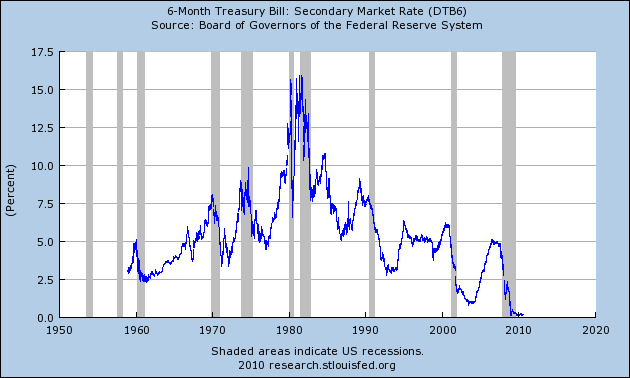 The above is occurring because people are running for cover and are
happy to take a 0.20 interest rate instead of stuffing their money into a
stock market that is more reminiscent of a casino.  The skepticism is rooted in the fact that many are feeling in their gut the systematic dismantling of the once mighty middle class in America.
Banks would love nothing more than for this to happen since a large
portion of their income now comes from gambling on Wall Street.  So
massive foreclosures and defaults are fine as long as they can invest
and speculate and make money that way.

“After all, many companies they support have moved jobs
overseas so we now operate in a world where the interest of the banks is
not aligned with the interest of typical Americans.  In fact as we have
seen with short selling the market, some investors and banks make
billions of dollars by betting against the American economy.”

The only people talking about a recovery are those in the banking sector because for most there is no hint of a recovery: 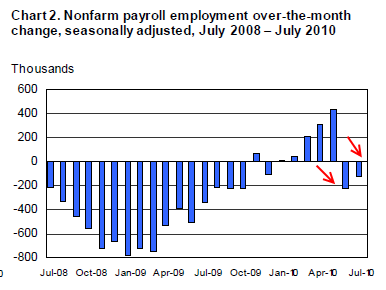 Keep in mind the last two jump ups have to do more with Census hiring
and the last two months of losses include those jobs pulling away.  So
basically any gains or losses are at the hands of artificial
intervention.  The overall economy is stuck because so much money is
being sucked into the banking sector.  Why would banks want to lend to a
shrinking middle class
when they can make more money speculating on Wall Street?  It isn’t
like the bailout money pushed into their lap had any strings attached,
lobbyists made sure of that.  So here we are nearly 3 years into this
crisis and trillions of dollars poorer yet the middle class has gotten
smaller.  We now have 40 million Americans on food stamps.  Even the U.S. Treasury head noticed this but this is thanks to the banks siphoning off money from the actual productive sectors of the economy.

Banks have pulled back on their lending: 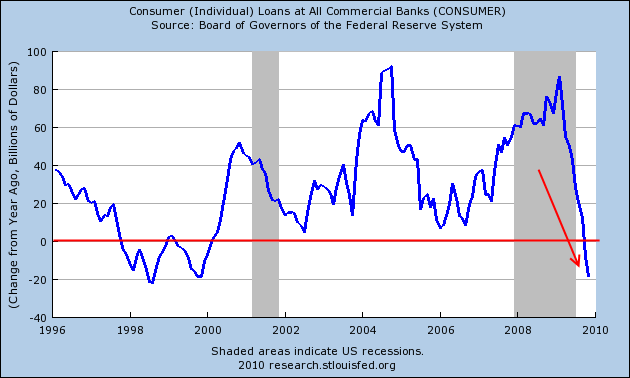 Clearly the middle class is not getting any net benefit from all the
bailout money.  So where is this money going?  The bailout funds have
gone to repair the broken and battered balance sheet of banks.
Yet this was not the pretense that was put on the table years ago.
What was sold to the American people was that the bailout funding was to
keep lending going and shore up the housing market.  Does the above
look like that?

From January to June, over 1.7 million American homeowners received a
foreclosure filing.  If we look at overall foreclosure activity it
remains elevated: 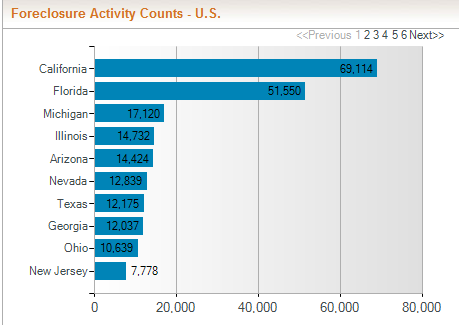 The reason foreclosures are still at peak levels is because Americans are largely unable
to shoulder the massive amount of debt they are under.  The housing
market is still trillions of dollars away from the peak we reached: 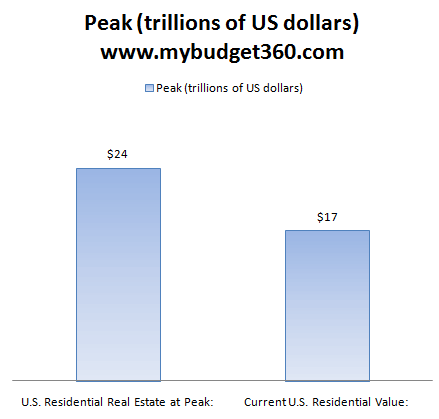 In total, roughly $7 trillion in U.S. residential real estate values
have been lost in the last few years if we use the current Case Shiller
data and the Fed flow of Funds report.  However, the amount of debt working and middle class Americans has not adjusted accordingly: 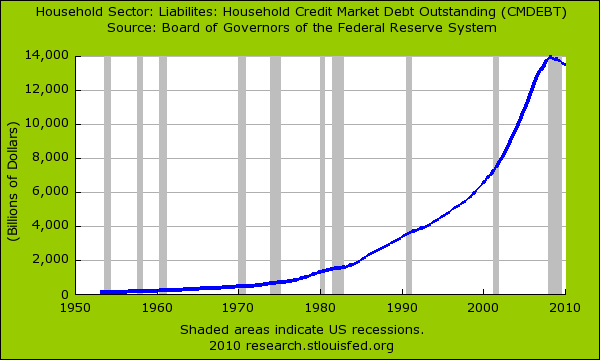 While actual real estate values have fallen by close to 30 percent
household debt has only moved lower by 2 percent!  And you wonder why so
many Americans are underwater and defaulting in mass on their loan
obligations.  The middle class is slowly being taken apart and this is
no accident.  Banks
would want nothing more than to cement their power further and this was
seen when the too big to fail got even bigger in this crisis.  Time to break up the banks and restore power to working and middle class Americans before it is too late.

Why Free Trade Is Not Good for America

Trader Scott – “My intermediate outlook changed to bearish on stocks, for the first time in over 4 years” – December 9, 2015