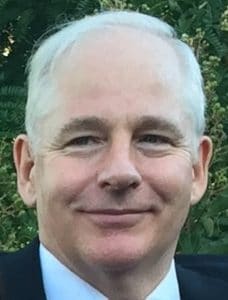 Dr David Evans earned six degrees related to modeling and applied mathematics over ten years, including a PhD from Stanford University. He was instrumental in building the carbon accounting system Australia uses to estimate carbon changes in its biosphere, for the Australian Greenhouse Office. His wife’s blog at joannenova.com.au is one of the biggest skeptic websites in the world. Forthcoming book on global warming, explaining how the whole climate alarm is based on a modeling error, and predicting solar-induced global cooling soon.

Evans found that the basis for the carbon dioxide theory of global warming, which dates back to 1896, is in error because it omits one of the two main climate feedbacks, the rerouting feedback — increasing carbon dioxide traps heat in the upper troposphere, which warms the upper layer of water vapor that emits to space, so the trapped heat is mainly radiated to space by water vapor instead, rather than traveling down and warming the surface as in the climate models. The surface warming due to increasing carbon dioxide is a fifth to a tenth of that predicted by the IPCC, and less than 20% of the global warming since 1973 is due to increasing carbon dioxide. He also discovered a delay between changes in the Sun’s total output and global temperatures, of one solar cycle, and on that basis predicts global cooling from 2017 after the fall in solar output in 2004.

-Simplistic surveys used to claim that 97% of climate scientists agree with global warming. On a detailed survey, only 2/3 agree that more than half of global warming is due to man-made activity.

-Climate scientists will only get employed if they believe in man-made global warming.

-Global-warming theory was developed in 1950s and 60s; IPCC says every time CO2 doubles, temps will rise 2 to 4.5 degrees C. So world could go up 15 degrees C in the next 50 years, according to the simple model.

-The model is rubbish. It’s built on physical principles that are correct, but temperatures aren’t rising nearly as fast as models say they will. Modeling vs. empirical data. If models don’t predict what is happening, the theory is incorrect. Temps rose initially, but the rise has almost leveled off.

-Ocean temperatures at 2,000 meters down are sampled 1 every 100 miles to 1/100th degree C. No rise in first 20 years. Measurement process doesn’t back up the models.

-Dept. of Energy funds the work. You can’t get money if you don’t agree with them.

-One of the data sets is run by skeptics at University of Alabama at Huntsville. Other data sets get adjusted. Adjustments always move the data from not agreeing to agreeing with the theory.

-Evans found the mistake in warmist’s model. His own model says 20% of warming since 1970 is from carbon dioxide and man-made activities; 80% of warming is due to sun. Skeptics say fluctuations in sun are too minor to cause the temp change, which is true. But sun affects the clouds; 30% of incoming light is reflected back. But change that to 29 or 31% and you’ll get warming or cooling. Sun throws out electromagnetic fields, charged particles, which affect the troposphere, which affects the jet streams, which affects clouds.

-Solar activity peaked in 1987 but world’s temps increased until 1998. Sun has a delay of about 11 years (1 sunspot cycle). 3 occasions in last 400 years when sun activity abruptly declined. Decline in sun spots in 1640 – Maunder Minimum, 1800 in Napolean era, and in 2004. Expect a downturn in world’s temps due to solar effects starting in 2017. World will go into a cooling trend this year or in the next few years. Decrease in solar activity will overwhelm slight increase from carbon dioxide.

-Pattern of solar pattern broke from 1945-1990, during the years we were doing atomic testing, which kicks up dust in the stratosphere.

-We only have a vague idea of how climate works. #1 effect is water vapor, #2 is carbon dioxide. Been measuring sun spots for 400 years. Only started measuring clouds in 2000. Hard to get global measurements.