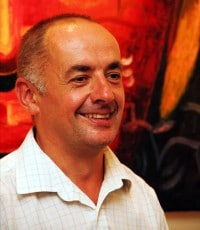 Chris was born a very ill child with severe asthma allergies and many respiratory conditions, was never expected to live, and was managed on many many pharmaceutical medications.

At about 13 years of age, he was collapsing unconscious several times a day, his father took him to various healers, and little difference was noticed. Then by chance he ended up being treated by a Polish Cranial Osteopath and in six sessions turned his health around. Unfortunately Chris decided to catch up on everything he missed out on and smoked drank and kept a crazy life.
During a down period he was treated with hypnotherapy, he was impressed and trained with many hypnotherapists including a four year study and became a hypnotherapy teacher.
He was also running a family garage business, and was intrigued that customers could bring in a car, that he and his staff could diagnose the problem and fix it, but this would rarely happen in the medical world. He sort to study how he could help people in the way his garage helped customers cars.
Chris did a 17 year study of mind emotional and health treatments. He became the right hand man of Dr Roger Callahan the Father of energy psychology, Chris taught on behalf of him and traveled the world even researching Dr Callahan’s work on Malaria in Tanzania.
Chris was not interested in the politics of such therapy treatments and resigned as President of the Thought Field Therapy Association, he became an independent, and through a series of magical events and out of body experiences created the massive field of Reflective Repatterning known as RR for short. This has become some of his finest work and is thought by many to be the most effective emotional mind body treatment available today, it also improves many other therapies to become a lot more than a tool but a way of life, and an understanding of the Laws of Opposites.
Chris travels widely today to teach his unique work, and treats people over Skype from all around the world. Today Chris is asthma free.

Dr. put him on a two week all grape diet just to detox – and it worked

Liposomal Glutathoine was also instrumental in his healing journey

We recommend anyone interested in experimental with a turpentine protocol keep in mind that our guests or One Radio Network does not give medical advice and you must take total responsibility for all you put on and ingest by mouth.  Education is critical before embarking on “Alternative” treatments.  A good place to start is with a free report penned by Dr. Jennifer Daniels called the Candida Cleaner Report.

The Cleanest Pure Gum Spirits of Turpentine is in our Store and ships through Amazon.  Diamond G Forest Products   We spoke with the man who produces this product, it is an essential oil.  Diamond G taps the pine trees and distills the sap into Pure Pine Gum Spirits.  Nothing else.