Co-Authors ofBuddha’s Diet: The Ancient Art of Losing Weight Without Losing Your Mind

There’s a lot you probably don’t know about the Buddha. For one, the real Buddha was thin. And before he became the “Enlightened One,” he was a pampered prince named Siddhartha. He tried dieting once and didn’t like it any more than you do. Instead, he sought a “middle way” between unhealthy overindulgence and unrealistic abstinence. The instructions he gave his monks about eating, more than 2,500 years ago, were surprisingly simple.

Fast forward to today, and modern science confirms what Buddha knew all along. It’s not what you eat that’s important, but when you eat. You don’t need to follow the latest fads or give up your favorite foods. You just have to remember a few guidelines that Buddha provided—guidelines that, believe it or not, will help you lose weight, feel better, and stop obsessing about food. Sure, Buddha lived before the age of doughnuts and French fries, but his wisdom and teachings endure, providing us with a sane, mindful approach to achieving optimum health. 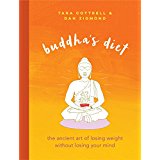 Dan Zigmond is a writer, father, data scientist, and Zen priest living in California. He is Director of Analytics at Facebook and advises startups and venture capital firms on data and health. He is a contributing editor at Tricycle: the Buddhist Review and teaches occasionally at Jikoji Zen Center in the Santa Cruz mountains.

Tara Cottrell is the author of the non-fiction book Buddha’s Diet with co-author Dan Zigmond. Though she is not a Buddhist, she’s intrigued by the teachings of Buddhism, and by Buddha’s emphasis on learning and discovery. Buddha’s Diet was written to bring together both science and mindfulness. In researching and writing, the wealth of data behind why intermittent fasting is the future of health was uncovered…and why Buddha was onto something, thousands of years before biohacking.

Buddha – the one who is awake.

Buddhism aspires to balance in life. Maintaining a spiritual plus a secular life.

Buddha’s instructions about diet were when to eat, not what to eat.

Dan eats between 9 am -6 pm. Focus on helpful foods.

Brain and heart work 24 hrs a day, but not our metabolism. We weren’t designed to eat during all our waking hours.

Having a break from food allows recovery from digestion and let’s the metabolism catch up.

Buddha was not a vegetarian. He ate what he was given. Focused on timing of eating.

Buddhist dictate of “Do Not Kill” is interpretated 2 ways by followers. Don’t eat foods that have been killed vs. don’t kill yourself.

Start by restricting eating to 12 hours and work down to 9 hours.

Meditation – taking time for yourself.

'Dan Zigmond and Tara Cottrell – Co-Authors of Buddha’s Diet: The Ancient Art of Losing Weight Without Losing Your Mind – February 16, 2017' has no comments