Gut and Psychology Syndrome (GAP Syndrome or GAPS)™ is a condition which establishes a connection between the functions of the digestive system and the brain. This term was created by Dr Natasha Campbell–McBride, MD, MMedSci (neurology), MMedSci (human nutrition) in 2004 after working with hundreds of children and adults with neurological and psychiatric conditions, such as autistic spectrum disorders, attention deficit hyperactivity disorder (ADHD⁄ADD), schizophrenia, dyslexia, dyspraxia, depression, obsessive –compulsive disorder, bi-polar disorder and other neuro-psychological and psychiatric problems. 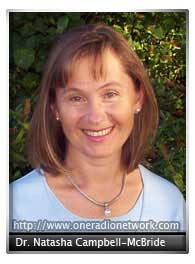 Dr. Campbell-McBride book “Gut and Psychology Syndrome” reveals the true connection between nutrition and brain function. Written by a neurologist and practicing nutritionist it is a “no holds barred” investigation into the real facts behind why todays generation of children have the highest incidence of learning disabilities and behavioural disorders ever.

Dr. Campbell-McBride believes strongly that autistic children (and many adults as well) do best on a diet where gluten and casein are eliminated when the intestines are inflamed and further believes that fermented foods are a must.

Dr. Natasha Campbell-McBride holds a Degree in Medicine and Postgraduate Degrees in both Neurology and Human Nutrition. In her clinic in Cambridge, UK she specialises in Nutrition for Children and Adults with Behavioural and Learning Disabilities, and Adults with Digestive and Immune System Disorders.

'Dr. Natasha Campbell-McBride – The True Connection Between Nutrition and Brain Function – May 13, 2009' has no comments