Topic: Living conditions of factory farmed pigs and how consumers can help bring about change for these social, sentient animals 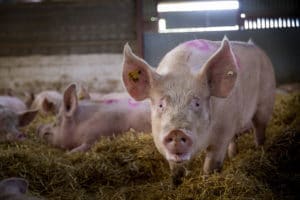 If asked to think about the lives of pigs raised for food, many people picture a vast, colorful playground like the song of Old MacDonald. However, the reality is far darker for the 115 million pigs used for food in the US each year. To meet increasing demand for cheap pork, pigs are often reared in intensive, barren factory farms, and confined in steel cages where they resort to biting the bars and the tails of other pigs in frustration. More humane farming is possible, and it is better for pigs, human health and the environment.

·         Gestation Crates:  75 percent of mother pigs spend most of their lives alone, in a steel cage so small they cannot turn around

·         Mother pigs are chronically depressed and are bred to give birth to large litters of fast-growing piglets, all to maximize profit.

·         Before giving birth, a mother pig is moved to another steel cage, where she’s denied her instinct to build a nest to prepare for her piglets.

·         Most pigs never feel the earth beneath their feet. Their flooring is hard, concrete slabs and when they relieve themselves it creates an unsanitary condition.

·         They routinely receive antibiotics to prevent the spread of disease.

·         Such as cage-free group housing, can reduce disease risk and require fewer antibiotics.

·         When pigs have room to move and opportunities to play and socialize, they are less stressed.

·         These systems also include toys. Pigs have the intelligence equivalent of a 3-year old child and need the play stimulation to keep healthy and growing.

How consumers can help bring change for pigs.

·         Use your purchase power to buy from places that stock humanely sourced meat.

·         Many consumers will consider animal welfare in their purchase decisions. We have cage free eggs, cage free chickens, free range beef, but no standards or labeling of pig products. Why do we have this for other animals but not for the most intelligent farm animal?

·         Eat less meat. Consider eating a vegetarian diet one day a week. Increasing demand for meat leads to more crowded factory farms. Even a decision to eat less meat can mean change for farm animals. (By 2050, livestock production will be twice what it was in 2000. Right now, more than 70 billion animals are farmed for food each year – two-thirds in conditions that mean they can’t move freely or live naturally.)

This little piggy went to market, but Oh My what did they experience on the way

There are 70 Billion animals raised on factor farms every year

The glaring issue is the cages used, alone in a cage and living in their own excrement

The huge pig farm China purchased a few years ago, Smithfeild Farms, has been making some progress yet not nearly enough

Two guests from The World Animal Protection talk about their efforts to promote a more humane life for pigs, August 23, 2018

'Alesia Soltanpanah – Living conditions of factory farmed pigs and how consumers can help bring about change for these social, sentient animals  – August 23, 2018' has no comments