Lyndon LaRouche is an American political activist and founder of a network of political committees, parties, and publications known collectively as the LaRouche movement. Often described as a political extremist, he has written prolifically in his publications on economic, scientific, and political topics, as well as on history, philosophy, and psychoanalysis, largely promoting a conspiracy view of history and current affairs.Members of the LaRouche movement see LaRouche as a political leader in the tradition of Franklin D. Roosevelt. Other commentators, including The Washington Post and The New York Times, have described him over the years as a conspiracy theorist, fascist, and anti-Semite, and have characterized his movement as a cult.[3] Norman Bailey, formerly with the National Security Council, described LaRouche’s staff in 1984 as one of the best private intelligence services in the world, while the Heritage Foundation, a conservative think tank, wrote that he leads “what may well be one of the strangest political groups in American history.

Lyndon LaRouche joined Patrick in an intelligent and enlightening discussion on world affairs. Mr. LaRouche talked extensively about the British Empires control of governments, it’s responsibility in the assassination of JFK and Bobby Kennedy and it’s connection to 9/11. Is there really a group of people who wish to control the world and reduce the population? Mr LaRouche presents a pretty good case. This is a very interesting interview with a man who has some good ideas on how to fix the problem. As he says..”the earth should be populated by sovereign nation state republics.” Sounds good to us. Enjoy the show! 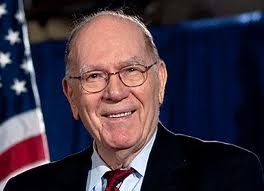 'Lyndon LaRouche – “Earth Should Be Populated By Sovereign Nation State Republics” – September 20, 2011' has no comments