Vitamin D is not a vitamin but a hormone. It is unique in that it is made in the skin as a result of exposure to sunlight. Photosynthesis of vitamin D has been occurring on earth for more than 750 million years. Some of the earliest life forms that were exposed to sunlight for their energy requirement were also photosynthesizing vitamin D. Both children and adults have in the past depended on adequate sun exposure to satisfy their vitamin D requirement. It is well documented that at the turn of the last century upwards of 80% of children in the industrialized, polluted cities of northern Europe and northeastern United States suffered from the devastating consequences of vitamin D deficiency rickets. The skin has a large capacity to make vitamin D. Exposure of a person in a bathing suit to a minimal erythemal dose of sunlight, which is typically no more than 15-20 minutes on Cape Cod in June or July at noon time, is the equivalent to taking 20,000 IU of vitamin D orally. It is now well documented that in the absence of any sun exposure 1,000 IU of vitamin D3 a day is necessary to maintain healthy levels of 25-hydroxyvitamin D in the circulation. An analysis of the NHANES III data has demonstrated that neither children nor adults are receiving an adequate amount of vitamin D from their diet or from supplements.

Read more of this article » 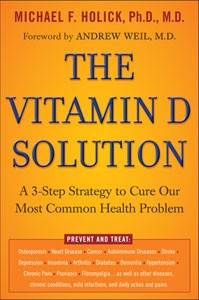 'Dr. Michael Holick – The Vitamin D Solution: A 3 Step Strategy to Cure Our Most Common Health Problem – November 29, 2011' has no comments