Author of How to Starve Cancer

In this truly ground-breaking book, Jane takes us through her remarkable, heart-breaking journey, and the medical discoveries she made along the way. The use of ‘off label’ drugs for treating cancer is finally gaining traction. Yet Jane discovered these herself in 2003. Unbeknown to her, she would become ‘patient zero’.

Diagnosed with terminal cancer in the prime of her life, and with no viable treatment options, she used herself as a human guinea pig, putting together a cocktail of low toxicity drugs, not normally used for cancer, alongside a low glycaemic diet and powerful supplements. These ‘starved’ her cancer of glucose, glutamine and fat, which she demonstrates with her ingenious, easy-to-follow ‘McLelland Metro Map’. 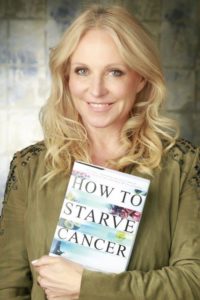 Jane trained as a Chartered Physiotherapist, gaining a distinction in her exams and winning the Sarah Leeson Memorial Award for the most promising student. After qualifying she worked in the NHS and private practice for 12 years specialising in Neurology and then Orthopaedics when she left the profession to pursue more entrepreneurial endeavours.

In 2002 she launched a range of toiletries and a uniquely-designed waterproof book under the brand name BATHrobics and the following year she won the coveted UK Gift of the Year Award.

Throughout this time (from 1994 until 2004), Jane battled two aggressive cancers with metastatic spread, both were classed as ‘terminal’.

Using her medical knowledge and researching heavily, she put together a cancer-starving formula, using natural therapies, exercise and diet. When she developed a second cancer, leukaemia, the result of chemotherapy and radiotherapy for her first cancer, she knew she only had weeks to live. With nothing to lose, she put together a unique cocktail of old drugs. To her enormous relief, joy and surprise, her cancer just ‘melted away’. Her cocktail was more powerful than she had ever hoped.

Jane McLelland used a cocktail of off label meds to release her body from Cancer, October 24, 2019

'Jane McLelland – Author of How to Starve Cancer – A Unconventional Conventional Way to Stop Cancer October 24, 2019' has 1 comment