The Autistic Holocaust:The Reason Our Children Keep Getting Sick

One Out of Every Sixty-Eight Kids Are Autistic

For many years our government has been deceiving us: we are the most lied to nation on earth. Autism is atremendous problem that affects everyone, a major public health crisis of unequaled proportions, and yet ourgovernment refuses to acknowledge it as such.

Jon E. Mica’s book The Autistic Holocaust: The Reason Our Children Keep Getting Sick (TrineDay, May
2015, ISBN: 9781937584832) accuses the federal government of having a corrupt and morally unsound
relationship with “Big Pharma.” First noting the dramatic rise in cases of autism in the United States since the1970s, The Autistic Holocaust then discusses the rampant misuse and dangers associated with vaccinations.

Additionally, the book argues that the Center for Disease Control has lied to the American public by presentinginaccurate data on annual flu deaths and, along with the Vaccine Safety Datalink, has buried damaging researchon the perils of vaccines. Written by a parent of a child suffering from Asperger syndrome, this book is a must readfor anyone concerned with the neurological brain disorder.

It is clearly evident from the testimony given in the OCGR hearing that the CDC is being completely evasive,and genuinely disinterested in preventing or curing autism. They even signed a secret contract with a privatecompany for $195 million, to keep the Vaccine Safety Datalink hidden from all external researchers. The VSDis what determines vaccine safety. And is the basis of policy which our government determines if we should bevaccinating our children or not. Big Pharma and the CDC have been poisoning our kids and making them sickfor years. They have flat out lied to us.

The CDC and Pharma knew over 10 years ago that thimerosal had an association to neurodevelopmental
disorders and autism. They proved it themselves. Then they hid the truth in the VSD. No external researchershave ever had access to the VSD except the two independent researchers mentioned in the book. Their accountwith the CDC is detailed and reads like a mystery novel.

About the Author: Jon E. Mica was born in 1959 in Mt. Clements, Michigan, and has lived most all his lifein upstate New York. He graduated from Liverpool High School in 1977, and since then has been married twice.Jon has one child who was diagnosed with ASD (Autism Spectrum Disorder) in 2000. Currently living in thebeautiful Finger Lakes region, Jon enjoys writing, cycling, and playing chess.

-Does having bipolar disorder or any other depressive disorders raise the chances of having an autistic child?

-Autistic children and gastrointestinal problems; do vaccinations cause these problems?

-Schools are beginning to no longer allow exemptions from vaccination; the boom of homeschooling 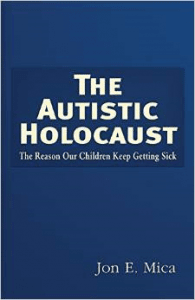 jim mica on vaccinations and our relationship with government agencies, june 9, 2015

'Jon E. Mica – The Autistic Holocaust: The Reason Our Children Keep Getting Sick – June 9, 2015' has 1 comment