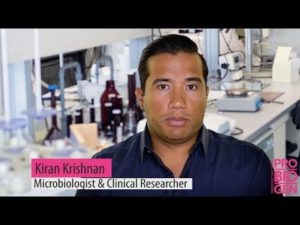 It’s been called “Foundational Food” and is certainly regarded as a critical nutrient. We all know that modern, processed foods are stripped of most of their nutrient value, but one other factor stripped out that gets less attention is the beneficial bacteria – probiotics.

It’s important to remember that our ancestors got their probiotics from the foods they consumed. They ate off the land and much of the food and liquid they consumed was brimming with mega doses of environmental bacteria. Most of those bacteria died as it passed through the harsh gastric system (gastric barrier), but some didn’t. These specialized strains developed an outside, protective shell known as an endospore which enabled them to both survive in the outside environment, as well as to then successfully pass through the acidic gastric system and ultimately thrive in the intestines – these became nature’s true probiotics.

With thousands of years of exposure to these specialized strains of commensal organisms, humans have actually come to require the presence of these strains for proper, healthy function of many of our biological systems. With this ability to live and reproduce in two very different environments (outside the body and inside the body), these strains are said to have a “biphasic” lifecycle.

The most well-known, well studied and widely used biphasic probiotics are from the bacillusspecies. In particular bacillus subtilis, bacillus clausii and bacillus coagulans; Just Thrive™ brings you all three of these strains in clinically relevant doses, in addition to a recently discovered strain: Bacillus Indicus HU36. This is the first strain of probiotic shown to produce antioxidants in the digestive system where the body readily absorbs it, along with the other probiotic functions.

We have evolved to gain constant exposure to these strains from our food sources; however, in this modern age of sterilized food systems, these essential strains have been nearly eliminated and our exposure to them is very limited. This make supplementing with them a very important part of a healthy lifestyle.

Just Thrive™ is built around the Bacillus Subtilis HU58 strain that has been isolated, studied and verified by Royal Holloway London University. The product is then rounded out by the three other very powerful bacillus strains – bacillus clausii, bacillus coagulans and Bacillus Indicus HU36.

Bacillus clausii is arguably the most widely used probiotic in history as it has been used in two prescription drugs, in over a dozen countries, since the early 1950s; one of those products (Enterogermina®) is still on the market today. Its safety and efficacy with regards to GI defense is undeniable and that is why it has found its way into Just Thrive™. As part of the strain development program at London University, the entire genome of the strains chosen for Just Thrive™ has been sequenced, published and deposited into the International strain archive as a validated Bacilli species of the sub-class subtilis. This type of verification and identification is crucial to the assurance that a product is delivering the strains it claims to on the label. In fact, numerous studies have demonstrated that a large proportion of probiotic supplements in the market contain mislabeled strains and even unknown strains (sometimes pathogens) that are not listed on the label. (Gibson, G.R. et al 2005; Elliot, E. et al 2004; J.M, et al 1999; Hamilton-Miller, et al 1999)

-Humans are superorganisms, a walking talking rainforest, a complex ecology living in one collective.  Disruptions in the ecology lead to disease.

-We have pathogenic bacteria as a normal part of our ecology.  They play important parts in our ecology and are only problematic when the balance is disrupted.

-When body is hit with a lot of antibiotics, the bacteria that protect against antibiotics flourish.  H. pylori is a spirochete, and it spirals into stomach lining to survive.  We are selecting for the bacteria that can burrow in deeper, for a more virulent pathogenic version.

-Why did MRSA show up?  All the use of antibiotic has selected an antibiotic resistant strain.

-50% of antibiotic use is unnecessary.

-If selection pressure is removed, bacteria will come out of hiding.

-Oregano oil, colloidal silver, mastic gum – all have killing effect, but none have precision and are killing good and bad bacteria.

-Most pathogens come from us or species that exist close to us.  E. coli is a normal part of the gut.  It’s a particular type of e. coli that comes from cows that is pathogenic to humans, but it is pathogenic because of all the antibiotics the cows are exposed to.

-An active infection requires antibiotics, nuking everything.  But before that point, we could control the pathogen with good practices, such as animal grazing.

-Less than 1% of bacteria are pathogenic.  Best way to control the pathogenic is to allow the good 99% to flourish.

-Hand sanitizers or antibacterial soaps give the rogue bacteria a chance to flourish.

-Households using chlorine based cleaners to sanitize around the house have children with a higher incidence of flu, viral infections, allergies, asthma, and so on.

-Kiran cleans by putting a few drops of essential oil into a bottle of water, spraying the surface, and wiping with a rag.

-We want our house to have a lot of different bacteria, especially coming in from the outside.  Having a dog will make the household healthier.  Clean doesn’t mean sterile.

-One of the most dangerous places you can be is the hospital.  You can pick up c. diff, MRSA, pneumonia and that’s because the hospital is always being sanitized.

-Some bacteria do live in the stomach, such as h. pylori.  The small intestine has a few thousand microbes/gram, a dozen species.  The colon has trillions of bacteria.   Different ecology and concentration depending on where the bacteria are.

-The function of bacteria in the colon is maintaining immune homeostatsis and metabolic homeostatis.  They control energy utilization.  They ferment and break down food, produce short chain fatty acids like butyrate.

-Do fermented foods help the microbiome?

-The bacteria in fermented food will die in the stomach acid.  But all the things the bacteria did during the fermentation process are nutrients for the rest of the bacteria in the gut.  It’s all about the soup.

-Probiotics aren’t useful.  Zero scientific substantiation that more cfu is better.  Strains that are used in them aren’t making it through the gut.

-Healthy primitive peoples lived in dirt.  The natural probiotics in dirt are where our ancestors got their probiotics.  These are bacteria that can get past the stomach acid and live in the intestines, where they create a huge measurable change in that microflora.

-Bacillus endospores exist as a natural part of our gut and also outside in the environment.  They act as gut police.  Are capable of quorum sensing.

-When bacillus endospores identify pathogenic bacteria or bacteria in high numbers, they park next to them and release up to 25 antibiotics against them.

-Kiran’s two products:  MegasporeBiotics have 5 bacillus endospores and has a higher strength.  Just Thrive has 4 strains.  That’s all the strains you need.

-MegaSporeBiotics must be obtained through a physician.  Get Just Thrive here from Amazon.

-The bacteria in these two products also produce internal antioxidants.

-Endospores are designed by nature to survive the gastric system.  They put an armor-like coating around themselves when they’re in a hostile environment like in stomach acid.  Once they pass through, they release the coating and act like normal bacteria.

-Took 10 years of research to identify the critical strains.  Needed probiotic function and also to protect the host.  Most probiotics are dead debris which might have some immune stimulatory benefits.  But they are living and don’t make any changes.

-A 7 day course of clindamycin can take your body 2 years to recover from the disruptive ecology.  One dose of Augmentin wipes out the bacterial load in the stomach by 90%.

-You will feel a difference with Kiran’s products even if you don’t have a named disease.  We become accustomed to gastric dysfunction and lethargy and don’t realize we’re off.

-What can we do to encourage a good microbiome?  Increase the diversity of your diet.  Our ancestors ate 600 different foods, we eat 15-20.  Eat organics.  Reduce the antimicrobials you are exposed to.

-Variety of foods feeds all the different microbes.  If you have good soil, get some of it in you.

'Kiran Krishnan – A Deeper Understanding of the Gut Microbiome – October 3, 2017' have 3 comments