Just a Guy Who Knows Some Great Stuff About Health

We learned about Tony Pantalleresco through a request from one of our listeners in the UK and he has quickly become one of our most popular guests. Extremely passionate about natural health, Tony has a plethora of videos on YouTube covering a huge variety of topics such as: Making all kinds of extracts, seed milks, nut milks, detox meals and smoothies, juices, chelators, anti-oxidant formulas. Getting rid of cold sores, dealing with skin issues and erectile dysfunction, detoxing heavy metals. Tony offers an endless list of recipes for remedies to make at home.

-The problem with nanoparticles on our food; Tony talks about the difficulty of removing the particles when cleaning fresh food; what nanoparticles do to the body

-Tony talks about discharging your body from electromagnetic fields by standing on aluminum; he recommends standing or sitting with your feet on it for at least 30 minutes

-The easy way to make liposomes; could it really be that simple?

-Start your own grow-ops and grow your food indoors

-Clean yourself out with Sodium Thiosulphate; what’s the difference between using it as opposed to using antibiotics if STS supposedly wipes out everything?

-Ideas for breaking up kidney stones

–Question from a listener:A previous guest of Patrick’s, Dr Sarah Myhill, mentioned a supplement called F.O.S. (or fructooligosaccharides) which I believe is derived from inulin, which is itself derived from chicory root. This supplement is marketed as both a fiber and a prebiotic. Having listened to Tony for many years, I don’t recall him mentioning it. Is there any particular reason for this? Why does he opt for pectin over FOS/inulin?

–Question from a listener:Is a commercial supplement entitled “Apple fiber with apple pectin” likely to be compromised with chemtrail material because there is no guarantee that the apples used to make it have been peeled?

–Question from a listener: Can Tony think of any way in which one can reduce the nauseous feeling that can occur when taking large doses of zinc citrate?

–Question from a listener: Last month, Tony briefly touched on the subject of nootropics.Which nootropics has Tony found to be most effective in terms of prolonged energy and concentration?Are nootropics that elevate histamine levels—such as adrafinil—problematic?

-Baking soda and borax for removing radiation from the body

–Question from a listener: I have been taking STS with vitamin C (1tsp each in water) periodically to detox but was wondering if the STS is hard on the liver or kidneys. Also is it OK to eat a little food before taking the STS & vit C
combination?

-Why some women have hot flashes and some don’t

–Question from a listener: What are Tony’s thoughts on bone broth? Is it a good thing to make and have at this day and age?Tony previously mentioned he does/takes specific things before he goes outside (to protect from chemtrails). Can you please ask Tony to go through his protocol again?

-A listener calls in and has developed severe clumsiness; Tony says it’s aluminum poisoning and gives ideas for detoxing it

–Question from a listener: What would Tony suggest for someone who has been exposed to the organochlorine compound called Kepone (aka chlordecone)? It is an insecticide related to Mirex and DDT. I may have been exposed to some level of it in the 1980s after living near a chemical incineration plant which disposed of it. I have since noticed that some people in low lying areas in that locality have developed cancers at a frequency faster than other areas (but obviously cannot claim causality).

-Tony’s thoughts on hives; where do they come from and what can be done about them?

–Question from a listener: With the price of food rising and economic collapse what does Tony recommend we stock up on?

-Tony’s recipe for getting rid of gray hair

-Thoughts on dealing with an enlarged prostate 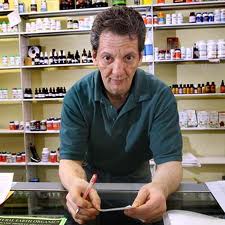 tony pantalleresco and healing at home, september 14, 2015, hour one

'Tony Pantalleresco – Learning to Rely on Yourself, Not Some Guru; Your Health Is Ultimately In Your Own Hands – September 14, 2015' have 8 comments