Co-Authors of Jaws: The Story of a Hidden Epidemic

Research is now linking crooked teeth to our epidemic of poor sleep, high blood pressure, cancer, and diabetes, not to mention our appetites, cognitive abilities, and work and school performance.

Jaws: The Story of a Hidden Epidemic by Sandra Kahn, D.D.S., M.S.D., and Paul R. Ehrlich, Ph.D., is a breakthrough book that uncovers a serious, mounting public health crisis.

Cultural industrialization has changed how we suckle, chew and breathe as infants, which has led to a dramatic increase in crooked teeth and crowded jaws. Roughly

one third of children are now afflicted, as well as an increasing number of adults.

While teeth can certainly be straightened, what about the underlying causes of this rapid shift in oral evolution and the health risks posed by obstructed airways? Sandra Kahn and Paul R. Ehrlich, a pioneering orthodontist and a world-renowned evolutionist, respectively, reveal why this sudden transformation has happened, along with simple, practical steps that parents can take to ensure their child’s jaw develops in a healthy manner.

The book has already received dozens of endorsements from medical professionals, and the authors include approximately 400 endnotes citing the scientific literature supporting their statements. 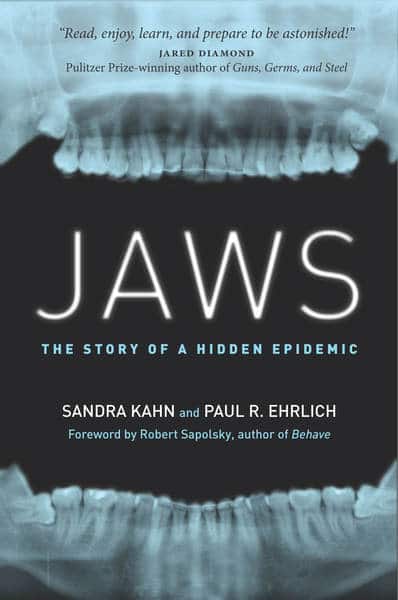 Paul R. Ehrlich, Ph.D., has been a household name since the publication of his 1968 bestseller, The Population Bomb. He is Bing Professor of Population Studies Emeritus and President of the Center for Conservation Biology at Stanford University. Ehrlich is a member of the National Academy of Sciences and a recipient of the Crafoord Prize.

Sleep Apnea, a major health issue World Wide is brought on by poor nutrition in utero and other lifestyle factors

In Europe and Patrick recalls his Grandma would give the very little ones a piece of stale homemade bread.  They understood the idea of teaching the babies to chew early on

Mouth breathing early on is the impetuous of a wide variety of health issues.

Paul Ehrlich PhD and Sandra Kahn D.D.S. on the epidemic of poorly formed jaws posing a multitude of problems, May 17, 2018