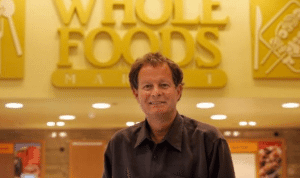 In a recent interview Whole Foods CEO John Mackey rightfully identified Obamacare as “Fascist”, reflecting on comments he made years ago when he referred to it as socialist.
According to The Hill:

“The CEO of Whole Foods Market said President Obama’s healthcare law is more like “fascism” than “socialism,” a parallel he drew in 2009, to some backlash.

John Mackey made the remark in an interview Wednesday with NPR.

“Technically speaking, it’s more like fascism,” Mackey said of the Affordable Care Act. “Socialism is where the government owns the means of production.

In fascism, the government doesn’t own the means of production, but they do control it, and that’s what’s happening with our healthcare programs and these reforms.”

The term “fascism” was first used to describe the right-wing regime of Italian leader Benito Mussolini, and was later applied to the Nazis and the authoritarian leadership of Francisco Franco in Spain.”

Unfortunately, most people don’t have such a clear understanding of what fascism actually is.
As John Mackey alluded to in the interview, fascism is an economic system that is defined by government intervention in the marketplace.

This government intervention breeds corruption, because it opens up way to much power to corruptible individuals. Overall this has always been the most widely imposed form of governance, even today, although it is rarely admitted.

Many people are under the impression that “fascist” is just some sort of abstract insult with no real definition.

If they did in fact know the definition, then they would understand that the Unites States has been fascist long before they were even born.

It is also important to point out that the reason why healthcare is so unaffordable to begin with, is because the government makes it so difficult and so expensive to become a doctor or local caregiver.

These obstacles set up by government will obviously reflect on the price of the healthcare overall. With that being said, move government involvement in the health care industry is only going to make things worse.

J.G. Vibes is the author of an 87 chapter counter culture textbook called Alchemy of the Modern Renaissance, a staff writer and reporter for The Intel Hub and host of a show called Voluntary Hippie Radio.

You can keep up with his work, which includes free podcasts, free e-books & free audiobooks at his website www.aotmr.com

'Whole Foods CEO Identifies Obamacare as “Fascism”' has no comments