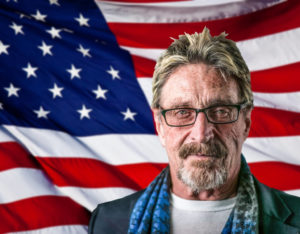 John McAfee  is a British-American computer programmer and businessman. He founded the software company McAfee Associates in 1987 and ran it until 1994, when he resigned from the company. McAfee Associates achieved early success as the creators of McAfee, the first commercial antivirus software, and the business now produces a range of enterprise security software. The company was purchased by Intel in 2011 and spun back out in 2017 with TPG Capital owning a majority stake, though the software has always borne the McAfee brand name. McAfee’s wealth peaked in 2007 at $100 million, before his investments plummeted in the financial crisis of 2007–2008.

Since leaving McAfee Associates, he has founded the companies Tribal Voice (makers of the PowWow chat program), QuorumEx and Future Tense Central, among others, and has been involved in leadership positions in the companies Everykey, MGT Capital Investments and Luxcore, among others. His personal and business interests include smartphone apps, cryptocurrency, yoga, and all-natural antibiotics. He resided for a number of years in Belize, but later returned to the United States in 2013.

McAfee is also a political activist, who sought the 2016 Libertarian Party nomination for President of the United States in the 2016 election, losing to former New Mexico governor Gary Johnson. (Source Wikipedia)

-John is on the run from the IRS; he tells us why and where he is hiding out with his wife, Janice

-The only currency John uses is cryptocurrency

-Monero vs. Bitcoin. Bitcoin is not private, Monero is. No one can ever see your transactions.

-Using cryptocurrency is about freeing yourself from the government and banks

-The Kennedys hated the CIA; it that why they were all disposed of ?