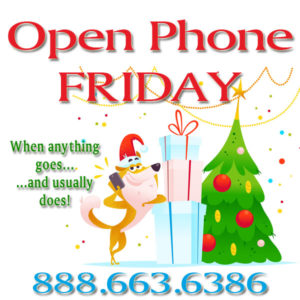 Patrick is up to 75 squats per day; Dr. William Wong says they’re the best exercise. Patrick is 73 years old so use that as encouragement to get started at any age on a good exercise routine

Dr. Massey was talking about how important it is to heal leaky gut

Robert, from Houston, calls in to talk about his experience going to Dr. Nunnally for several dental issues. Dr. Stuart Nunnally has an international practice in Marble Falls, TX. He’s one of the most well respected biological dentists in the world. Robert also tells us about how Doc Nunnally injected his infected tonsils with ozone

What is the significance of the Winter Solstice?

Using a nebulizer for lungs and sinuses; Patrick shares a recipe/blend

Using urine in a neti pot for sinuses

Bridgette calls in from Santa Rosa. She’s making scones with Einchorn wheat. She’s also making sourdough bread for all her loved ones for Christmas

Getting a little liver in your diet

Mark in Mass. calls in to talk about a soul travel/parallel universe experience. WOW….Atom sends in a really wild story of reincarnation

And some emails:  Monsanto’s Roundup is composed of 2 percent of glyphosate. The new generation of bioherbicides in Italy and France contain approximately 70 percent.

Most glyphosate is made outside the U.S. — 30% in China alone.  Trump isn’t World President.

Open Phone Friday with You, Doodle and Patrick for our last live show of the year, December 20, 2019 ONE

Open Phone Friday with You, Doodle and Patrick for our last live show of the year, December 20, 2019 TWO

'Open Phone Friday – Earth Is the Best Place Ever to Learn About God – December 20, 2019' has no comments