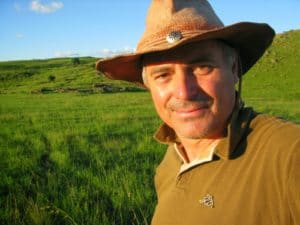 Michael Tellinger, is an author of six books, scientist and explorer, who has become a real-life Indiana Jones, making ground-breaking discoveries about advanced vanished civilizations at the southern tip of Africa. His continued efforts and analytical scientific approach have produced stunning new evidence that will force us to rethink our origins and rewrite our history books.

Michael’s major contribution to the field of ancient discovery has been delivering the proof of the tools and artefacts that support his scientific findings. He discovered more than 10 million stone ruins that are not dwellings, but energy generating devices. His Torus Stone, that crashed the TSA security systems at DOHA International Airport in July 2013, has sparked the imagination of the global scientific fraternity in the quest for delivering a new free energy device to the people of the world.

We have been told a fairy tale regarding the origins of humans.  Tellenger says the ancient text say Gods for another World Planted us here

Those that win the wars, write the history books

Gold plays a significant role in why Aliens came here eons ago..and not because of it’s monetary value

We talk about karma, reincarnation and balancing things out this lifetime

Being angry or frustrated at the way “things are” is the biggest illusion we can have, for we created this reality

Creating our own reality is simple.  We all do it every moment of every day.  We are pretty good at it actually.

Michael believes we are entering a potential Golden Age

Michael Tellenger on who we are, why we are, where we are and where did our bodies come from, June 7, 2018