Authors of  Proof of God: The Shocking True Answer to the World’s Most Important Question

The question is as old as old as humankind has had the ability to think, reason and ask – Is there a God? If so, does God care about us? Or is human life a mere accident of physics and biology? For centuries, these fundamental questions have been integral to every culture and religion the world has known – and have not been answered, save by faith. When it comes to finding answers about how the universe came into existence, “God” is simply another theory. A theory that, many say is no longer needed.

But in the new book, PROOF OF GOD: The Shocking True Answer to the World’s Most Important Question, New York Times bestselling author Ptolemy Tompkins join forces with internationally acclaimed astrophysicist Bernard Haisch to demonstrate that not only is God real, but that it is science, itself, that proves it. Ptolemy Tompkins, collaborator on the New York Times bestselling Proof of Heaven and Proof of Angels, is at his lowest point, personally and professionally, when he meets with an astrophysicist with a message for the world: God is real, and science proves it.

“Bernie” Haisch is something of an anomaly – a respected, accomplished scientist who believes, firmly and fervently, in the existence of God. Many scientist disdain faith, as there is no empirical evidence of any of it, and many Christians fear science, which they believe contradicts their beliefs. But the truth Bernie argues in this book, is that you can’t understand the universe without acknowledging that the evidence of God is clear in the very make-up of our world. Science and faith are two sides of the same coin. 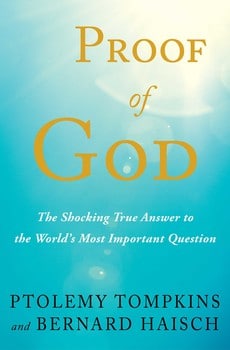 Astrophysicist Bernard Haisch on the science behind God, January 22, 2018

'Bernard Haisch – Author of  Proof of God: The Shocking True Answer to the World’s Most Important Question – January 16, 2018' has no comments