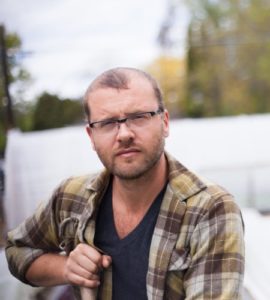 Curtis Stone is a farmer, author, speaker and consultant. His area of expertise is in quick growing, high value annual vegetables for direct consumer market streams. His book, The Urban Farmer demonstrates organic intensive techniques with a focus on business and systems to streamline labour and production. He offers a new way to think about farming. One where quality of life and profitability coexist.

Curtis’ farm, Green City Acres is located in Kelowna, BC, Canada and was established in 2010. In an eight month growing season, the farm generates over $75,000 per year on only one third of an acre. This is done by specializing in a select group of high value, quick growing crops that allow for multiple plantings in the same beds as well as calculated intercropping strategies. The farm has been recognized internationally, as flag ship example of how profitable and productive urban agriculture can be.

Scroll down for podcast!!

curtis stone, from communist to urban farmer, the business of growing food, january 10, 2017