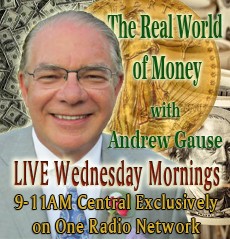 Andrew Gause and The Real World of Money

-Dollar climbed to a 3 week high against it’s peers.  Not so punky now.

-Dollar achieved its status as the international standard of money at Bretton Woods, where they divvied up the spoils of WWII and decided all international transactions to be settled in gold.  Harry White of the US changed the wording of the treaty to “gold or its equivalent”.  The dollar became the preeminent currency and was considered the equivalent of gold.

-With the reality that we were issuing far more dollars than gold to back it up, President Nixon closed the gold window in 1971.

-Saudia Arabia countries said if the dollar isn’t backed by gold or its equivalent, we don’t want to be paid in dollars anymore and shut off their oil.  Kissinger’s answer: “Nice kingdom you have here.  We will protect and support your country, but if you don’t accept dollars, we will have to take it.”  So they accepted dollars for oil.  Koran prohibits usury, but the wording of the agreement enabled them to buy U.S. Treasury Notes with interest by calling it sovereign debt.

-Money enters circulation when debt is monetized.  Bitcoin has a distributed ledger.

Fraud creeps in once you get away from the basic representation of money.

-The government is attempting to smash cryptocurrency by regulation and undermining confidence in it.

-Andy does not advise putting your assets into electronic money.

-India has banned the export of gold products with purity above 22 carats.  Citizens of India are having difficulty maintaining wealth.  The government had earlier removed large bills from circulation, forcing citizens to store wealth electronically.  Citizens are fleeing to quality and turning to gold.  They want to ship gold out to protect themselves because they fear the government seizing the gold.  The government is preventing the flight of capital from India by stopping gold exports.

-College kids say racisim is when whites discriminate against others, and reverse racism is when any other minority discriminates against whites.  Andy says it’s all just racism and abhors it.

-Charlottesville was planned as a protest against racism and removal of Robert E. Lee statue.  Trump’s statement that  there were bad actors on both sides engendered protests.  Andy says don’t let them divide us on the basis of color.

– Robert E. Lee was of historical importance and asked to command the North before he accepted command of the Army of Northern Virginia.  Where does it end?  Do we also tear down statues of Jefferson, Washington, Abraham Lincoln to “combat racism”, because they owned slaves or made derogatory statements about colored people?

-Morgan suggests that eventually people will find out there is little difference between crypto currencies and Ponzi schemes.  As bad or worse than Wall Street or the shrinking dollar.

-US went into a deflationary depression in 1929 because there was not enough money and it stopped the economy.  Recovery aided by public works projects and money for war entering circulation.  FDR recalled gold at $20/ounce.  Price shot up to $35-$40/ounce after that.

-True wealth confiscation is inflation.  Iran, North Korea, Syria are only 3 countries not controlled by a Rothschild bank.

-Ian proposes a precious metals backed cryptocurrency.  Andy says it might work, but it kills the idea of a decentralized system.  Who will hold the gold?

-Andy agrees it’s words of art, but the Constitution is part of Common Law.  Labor for money used to be called wages, now called income, subject to income tax.

-Pollack Decision in 1894 is when the Supreme Court ruled there is an income tax, but that tax is taxing profit severed from capital.  However, labor has intrinsic value, and wages are only a trade for the value of labor.  There is no profit and income for labor shouldn’t be liable to the income tax.

– 16th Amendment was not a new tax, but the meaning of income has changed.  Changed the basis from a proportionment to a non-proportioned tax.

-Andy proposes a replacement for the income tax based on proportionment.  Charge everyone a certain proportion of the GDP – an even tax for everyone.  Nationalize the central bank, and banks pay interest to borrow money from the Treasury.  The current situation is that a private central bank issues money and loans it to us at interest.

Joe says this racism is a divide and conquer strategy.  A distraction from the real problems and real culprits who have taken over this country and are bankrupting it morally, ethically, and financially.  Andy agrees.  He abhors racism but will not tell someone they can’t be a racist.  He prefers they’re out in the open so he knows who they are.

-Derrick wonders how the Feds can report record tax revenue year after year when there are supposedly more people out of work and more companies are moving off shore?  Andy says there are less people making more money.  1700 new millionaires every day.  The gap between classes is growing, the middle is getting eliminated.  Not everyone has fallen to lower socioeconomic classes.

-US Virgin Islands is the next to fall after Puerto Rico.

-Trump threw a punch to China with intellectual property probe.

-33% of corporate managers say profits will improve, as compared to 56% at beginning of year.  Volatility Index is increasing.  Hartford, CT is at junk status.  Illinois and NJ in financial trouble.

-Cutting corporate income tax will not kill us.  We’ll get tens of thousands of new American workers.  Trump is right in saying jobs is the answer to racism.

-If repaid all debt tomorrow, we’ d have the mother of all crashes.  Unless we created money to pay it, but that would drop the value of the dollar in half.

-Trail of Tears to Oklahoma was initiated because gold was found in Delonga, GA, where Native Americans were living .

-Need a 100 billion dollar bailout for Fannie and Freddie.

-Sony, Paramount – worse year for ticket sales ever.  The future is in-home entertainment.

-Netflik stole a big time producer away from ShowTime.

-Leon in Korea says Singapore has achieved the ranking of the third most attractive financial center in the world.   Due to favorable regulation and tax policy.

JB says: pigment is not a measurement off/or intelligence … we should remove ALL race support entities from our country if we truly are a nation of free peoples.   America is about all colors period! Those that do not accept this need to learn they are the ones that need to pick up their knuckles when they walk, not the rest of us.

-Preference by race started with Johnson’s Great Society.  Blacks wanted the right to vote and equal opportunity, LBJ wanted to give more.

-Does have the Fed have 62,000 tons of gold in the basement in Manhattan?  Andy says yes.

– They want to throw Sheriff Joe Arpaio in jail for upholding the law.

-The boys want to digitize everything  – your home, your car, your refrigerator, and put your debt instrument on a block chain system.  Andy thinks it’s inevitable.

-Nancy asks: What about people from India coming over here and being trained for our jobs and they’re paid less money.  US has a Visa program to encourage this.  India has an emphasis on technical training, so should the US.  US tech firms say we have a huge gap between needs and sufficient numbers of skilled people.

'Andrew Gause – The Only thing that is Constant in Finances is Change – August 16, 2017' has no comments