-The Euro Crisis-Complete and utter disarray on the surface

-Why can’t we cut the trillion dollar defense budget?

-Collapsing the Central Bank of Iran

-The Dearborn Independent and Henry Ford’s history with it.

-What Andrew has to say about American Eagles

-Are we in a depression or recession and how long will it last?

-Occupy Wall Street-Andrew advises to “pack up your tents and head down to Washington, that’s where the problem is”

-The U.S. Debt-This administration has made George Bush look like a miser

and so much more 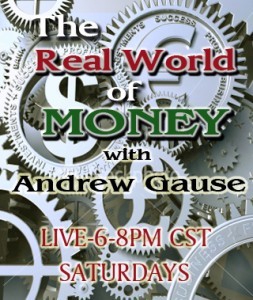 Andrew Gause may just be the top man anywhere for thehighest quality analysis into the world of money we alllive in. Andrew is a currency historian, an internationally recognized expert on the United States monetary system. He’s written two books, “The Secret World of Money” and “Uncle Sam Cooks the Books”. You can order these books as well as speak to Andrew personally. As a One Radio Network listener, you’ll have highest priority in his phone time. His # is 800.468.2646.

'Andrew Gause and The Real World of Money – Creating Dollars Till the Cows Come Home – November 19, 2011' has no comments